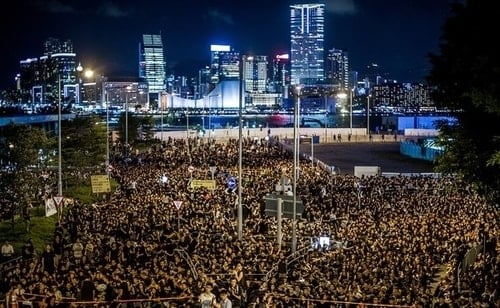 We talk a lot about cyberattacks, hacking threats and security breaches, and it’s all gathered under the banner of “cyber warfare”. But what is happening in China—Hong Kong, specifically– is literal cyber war.

For those unfamiliar, there are peaceful protests currently happening in Hong Kong over whether to allow a representative democracy in the region, as opposed to the current Communist regime that has been at the forefront of the Chinese government for decades.

Hundreds of thousands of protesters took to the streets of Hong Kong over the past few weeks to show their solidarity for a democratic government—known as the Umbrella Revolution– while the Chinese government in Beijing attempts to stifle them. Images, videos, social media posts and blog articles have all been snapped, recorded, updated and written showing the protests, the responses from the government and everything in between.

And that’s where the warfare begins.

The Battle of the Smartphone

Technology—and the smartphone in particular– has become the key tool for protesters in their fight for their causes. For instance, the Umbrella Revolution is using smartphones, aerial drones, and even mobile projectors to further their cause while the Chinese government moves to block the images and videos from being spread.

Chinese officials in Beijing have already blocked access to Instagram where others can see pictures and videos of the Umbrella Revolution, and are banning all posts on popular Chinese social media outlets like Weibo and WeChat that make references to the protests.

In response, the protesters have begun downloading FireChat, an app that connects users through Bluetooth and WiFi even when a mobile network isn’t available. And as for the government blocking social media updates that talk about the protests? protesters have begun using coded hashtags to bypass the system with #689 being a code for the number of votes received by Hong Kong chief executive C.Y. Leung, and #8964 being a code for the democratic protests in Tiananmen Square on June 4, 1989.

The Chinese government decided they didn’t like being duped through apps and codes, so they created fake links on social media that are seemingly endorsed by a prominent protesting group Code4HK urging protesters to download an app to coordinator more efficiently. In reality, however, the app contains a Trojan Horse and is just a tool used to track protesters through their calls, messages, location and even bank information.

The smartphone is the modern day sword.