Where Will You Be Storing Your Data in the Future? 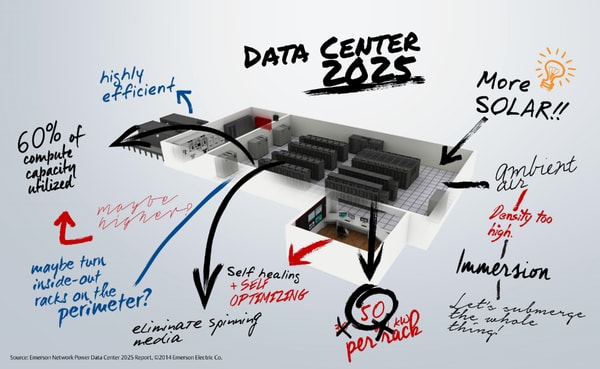 I’ll store my data wherever I feel like. Or in a futuristic data center…

That was the question the heady-folks over at Emerson Network Power wanted to answer.

So, they put their heads together and postulated what a data center would look like in the year 2025. They surveyed over 800 data-center professionals—arguably time-travelers—as to what they think. And their answers probably ranged anywhere from data centers on the moon to an underground labyrinth of geo-powered networks and tunnels churning out trillions of large words and numbers with complete access from anywhere in the world via those awesome magnet-trains.

Is 11 Years Enough Time to Build a Data Center of the ‘Future?’

It’s 2014 and we still don’t have market hover-cars—but we do have lots of other cool things. And let’s remember, we’re not talking about 50 or 100 years in the future—where obviously technology will be far-out cool—but only 11 years in the future, and really, is that all that far off to incorporate all those cool things into tomorrow’s data centers?

Well, sure—why not? Let’s take a look back 11 years to 2003 for a nice solid base of what kind of innovations we might be expecting. So, what were the main concerns of data centers back then? The CEO and president of MegaWatt Consulting, KC Mares, mentions in his Data Center 2025 video that data centers 11 years ago, “were mostly driven by processing or compute power.” On the other, potentially robotic, hand, Mares says that today’s—and possibly tomorrow’s data centers are “driven by storage and the need to not only store data but access it and use it.”

Ah, so that’s what your futuristic data center is going to need—but how are they going to do it better?

Working with smaller data centers with greater densities allows for all sorts of cool futuristic innovations. Emerson’s study highlights one awesome guy who proposed to turn the entire data center layout as we know it “inside-out.” That means taking all the server racks and other cool IT things and shoving them along the perimeter of the center and taking all the cooling paraphernalia and putting in in the center of the room. Pretty cool.

Speaking of cooling, higher density would need greater cooling and the premonition-filled experts in the Emerson study have some pretty unique ideas on that as well. One of the surveyed proposed that “data centers will be co-located with power generation, and likely environmental cooling options—producing their own power and dumping heat into geothermal heat pumps, freshwater containment, or polar installations.” Awesome. But realistic…eh?

So, what’s going to power all these new innovations in the meantime? Well, you guessed it—the Emerson study has some ideas on that as well. Power in future data centers will be determined by several factors:

Economy: Will data centers be built in areas with lower energy costs?

Climate: Will they be built in cooler climates?

Demand: What changes will occur in the demand for computing and storage?

Evolving technology: Will loads be able to shift between places with excess power capacity based on the time of day or year?

Let’s focus mainly on that evolving technology. Sixty-four percent of those surveyed in Emerson’s study think that data centers will cost less energy to produce the same outputs as today. So, what kind of power wins?

The progressive participants believe that data centers in 2025 will receive one-third of their power through solar energy. Which is pretty good considering where solar-power technology is today (for instance, if only 20 percent of power was given to a data center by solar energy today, then the actual array of solar panels would be the size of Godzilla). Solar energy does make sense, though, seeing that most data centers are huge skyscrapers where nothing would really be blocking the sun (see: Godzilla). The majority of the remaining two-thirds will be powered by either nuclear, natural gas, or wind.

Just like most things in life—the economy, the NFL Draft, the weather—the future is hard to predict.

Only time will tell whether or not we’ll get the underground-on-the-moon-geo-powered data center of our dreams.

Until then, watch out for the reflection from those gaudily large solar panel arrays and just let the future do its beautiful, unabashed thing.