NASA’s Lasers Could Be Future of Data Transmission 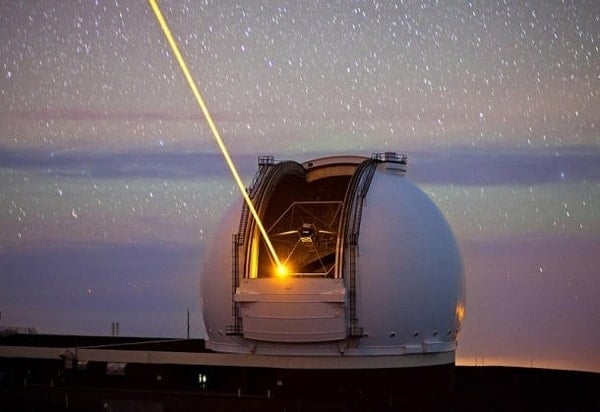 We’ve got space on the brain…

The team achieved top speeds of about 50 megabits per second, which is pretty good for stuff that’s going to SPAAAAAAAACE(!!). The system is called the Optical Payload for Lasercomm Science (OPALS) and it uses the lasers to lock onto a target on Earth as the ISS passes by—in this case a ground station in California—and then transmits the data in blazing speeds.

What does this hold for the future of communications in space and on Earth? Well for one, it’ll be way easier to transmit the data gathered on space missions back to Earth, giving us a nice close-to-real-time look at what’s happening out there. It will also give astronauts a high-speed Internet connection to the ISS and satellites—heck, they could even beam it to distant planets, so when we eventually colonize Mars, nobody will be without their precious Facebook news feeds.

But in all seriousness, using lasers to communicate with future deep space missions would be a great advancement in our knowledge of the universe beyond our sight. Imagine a mission like Voyager 1 being able to record and transmit HD video of its findings—it would open up a whole new facet of our knowledge of the galaxy and deep space.

While on Earth we have a pretty great system of transferring data through wired and wireless networks, LASERS(!!) maybe the future, and could be a big boon for Near Field Communications projects by helping them not be so “Near Field” anymore. Can you imagine a time when you want to send something to a neighbor, and you can just point your device at them and BAM! the file is on their device immediately? That’d be pretty, pretty sweet.