The Power of AI and Chatbots for Business Growth

What Makes a Computer Fast? 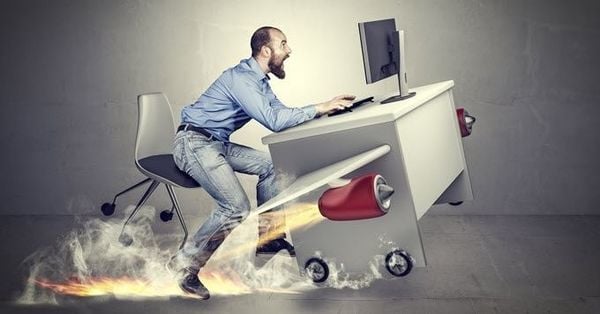 What Are the Different Parts That Make a Computer Fast?

The processor or CPU is one of the main components of a computer. The overall speed of a computer or “clock speed” of a computer is usually determined by how fast it processes data. We are multi-tasking every day, and this is no different when we are on our computers. As you’re reading this, you most likely have multiple windows open at the same time. The more capable your computer is at processing, and executing more instructions per second will determine how fast your computer is.

The next part of what makes a computer run faster is RAM or Random Access Memory. RAM is the computer’s short-term data storage. This stores the information your computer is actively using. This short-term memory allows your computer to access information more quickly. If you are using multiple programs at the same time, the more RAM you will need.

Bus speed is another important part of what makes a computer faster. A bus is a circuit that connects the different parts of the motherboard. The more data the bus can handle at one time will allow the information to travel faster. Bus speed is measured in megahertz. Bus speed refers typically to the front side bus or FSB. The FSB is what connects the CPU to the Northbridge (a chipset that communicates with the computer processor and controls interaction with memory). Since FSB is a middleman of sorts, its speed can drastically affect a computer’s performance.

The Hard Drive is also one of the main parts of a computer that contributes to its speed. A Hard Disk Drive or HDD has moving parts, which may result in some slower read and write times (mainly depending on HDD specs). A 5400 RPM hard drive will be slower than a 7200 RPM hard drive. A solid-state drive or SSD has no moving parts but instead uses flash memory, which often time reads and writes faster than a traditional HDD. Although one is newer than the other, there is still a debate on which is better: HDD vs. SSD. There are benefits to both types of hard drives.  A hard drive with a larger cache will allow data to be handled more efficiently.

The last piece of hardware vital to a computer’s speed is the Video Card or Graphics Processing Unit (GPU). Replacing the GPU may be the thing that adds the most speed to your computer. The GPU also needs access to RAM to function. Onboard graphics cards dedicate part of its system RAM to graphics functions. Adding a completely separate GPU will potentially add speed to your current onboard RAM, and it will also have its own set of RAM. Because of this, the graphics processing and overall system multitasking will see a boost in speed.

How Fast Does Your Computer Need to Be?

Computers are quite powerful these days. Most have more power than the average user will ever need. However, we all want the best. The convenience of having a quick computer makes our lives easier. Whether it’s checking email or scrolling through the Internet, most new computers are powerful enough to handle our daily tasks. We don’t want to wait when inspiration is flowing or when you’re in the middle of a project. We don’t want to wait for our computers when we’re ready to go.

This is especially true if you edit pictures and videos, use your computer to record music, or if you’re a gamer, your computer may need an upgrade from many out of the box setups. The computer works harder during these tasks and might need an upgrade, but computers are fast enough to handle most of the things we throw at them these days.

A computer’s speed is the sum of its parts. A computer is an intricate system that uses many different parts to perform the various functions we ask of it. So, if someone ever asks you, “What makes a computer fast?” it’s all of the above. You will need the best processor or CPU, cache, RAM, bus speed, Hard Drive, GPU, and the latest software and operating system. All of these aspects, working together in harmony, are what makes a computer fast. If one of these aspects isn’t as fast or powerful as the rest of the others, your computer may experience a loss of speed. Sometimes cleaning up your computer’s drives and troubleshooting your network may be all it takes to speed up your computer just enough.