What Causes the Internet to Slow Down?

The internet is much like the crowded freeways of Los Angeles during rush hour. Traffic, traffic, and more traffic. And the traffic is trying to merge and exit much in the same manner as a freeway system as well. It’s understandable then, that whenever there’s a large amount of people trying to use the internet at a particular time (say, Saturday Night movie time) the internet-freeways get congested and slow down. What used to take less than a second to load, could take several seconds or longer now. It sounds like a first-world problem, and maybe it is, but we’ve all been there. And Internet speed is generally determined by your ISPs point-of-presence (POP).

A point-of-presence, or POP, is just an access point provided by your ISP that connects to the rest of the internet. So, when you type in where you’d like to go on the internet (say, colocationamerica.com) your router sends out a signal (part of the traffic we talked about above) to the POP which then routes it to where it needs to go. The larger your ISP, the more POPs they’ll have, and typically the more reliable your internet connection will be. Typically a POP is located within a data center where all the routers, switches, servers, etc. are hosted—the gateway of the internet! But it’s not just a straight path from your the POP to the destination. Your router’s signal is going to bounce around to other routers (one highway to the next) until it finally reaches its destination. Then the destination router sends it back through to your router where the web page is loaded onto your screen. These routers that your signal bounce around on are some of the most crucial aspects of your Internet speed and they are called hops.

What Are Internet Hops?

Each time your packet of information is sent to another source, or router, and pushed forward to the next it’s referred to as a hop. At each hop there are latencies, so that’s why the more hops your data packet has to pass through, the slower it will take to reach its destination. Let’s look at an example: To test the amount of hops it takes for your packet of data to reach its destination you can run a command line IP traceroute (Windows: start menu → run → cmd). This will send a packet of data to the destination, but also request that the hops it reaches send back some information. Each hop is placed on a different line. We ran an IP traceroute to try and get to the always reliable google.com:

Notice that my request went through 13 separate hops to reach its destination. Notice also that each router sent back its IP address so we have a better understanding of where our data went. So….

As touched upon above, a traceroute is simply a utility that takes note of the route (or router-to-router-to-router highway transportation, following our analogy) between your computer and the destination on the Internet you’re trying to reach. Take a look at the below video to get a brief visual introduction into traceroute before we get into more detail below:   An IP traceroute is typically used to diagnose where the problem is when one is trying to connect to the webpage and/or their internet is running slowly. Just take a look at the amount of diagnostic syntax one can use to get exactly the information they need:

Thusly, performing a traceroute will give you a detailed look of the route a packet will take as it travel from one network system to another. One could reasonably gather, then, that trying to connect to a United States bound IP (like the Google example above) would take much longer than trying to connect to an IP abroad, like bbc.com: 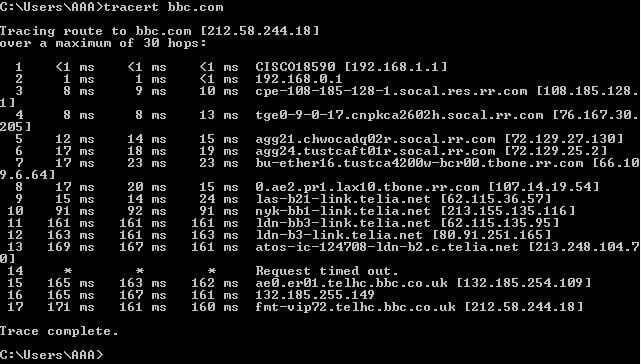 Notice that while to connect to Google it took 13 hops with no longer than 23ms of latency. Connecting overseas, however, took 17 hops and upwards of 150ms of latency. Notice also, hop #13 sent back no information. That could be a result of many things, but the most common being that that particular hop has a large amount of traffic and simply can’t respond to the tracert command. That’s mostly likely what happened in the above scenario as we were still able to reach our destination. Had the tracert continued to get those errors, then we would know that hop #14 is where our connection issue lies. Tracerouting is a great way to determine the strength of, say, a colocation or dedicated server provider much like us! In fact…. Seeing how Colocation America’s servers connect to other websites will give you a good idea of the connectivity we have to offer. Hosting with a dedicated server from Colocation America lets you take full advantage of our vast ISP networks, peering contracts with other ISPs, and our MMR which connects our data center clients with each other. We provide a way for your server to get a better connection by limiting the “hops” it takes to connect to another network. With such network redundancies, we offer superior connectivity with direct connections to top networks that can limit the latency and potential connection problems. If you’re having trouble with connecting to a website, running a ping test can let you know quickly is the host is online or not.

How to Run a Ping Test IP

To run a ping test, we’ll open the same command line and type ping (host) with (host) being the website you’re trying to connect to. You’ll get something like this (we’ll use Google again as an example):

As expected, Google is online and running. If you’re having problems it could be on a hop, which is when you’d use the traceroute utility.
GET QUOTE
0