If you’ve been using Windows 8 on your personal computer, then you’re going to be familiar with Windows Server 2012. If you’re still using a previous version of Windows, or Windows Server 2008 then there’s going to be a bit of a learning curve, but it’s rather intuitive. Instead of comparing WS 2012 to Windows 8, let’s compare it to Windows Client OS since, if you’re on this page, you’re most likely familiar with that already. Additionally the OS is the same whether you purchase 2012 Standard or 2012 Datacenter. The only difference between the two is whether you only need to run up to two virtual machines (standard) or you need unlimited virtual machines (Datacenter). Since the OS is the same, all the details below will fit into both the WS 2012 Standard and Datacenter versions (i.e. there’s no Enterprise edition to mess everyone up like in the 2008 editions). IT educator John Savill details the best features of a Windows 2012 dedicated server in this excellent video:

The differences are a long list, which you can read comprehensively here, but let’s just touch on the main highlights. One of the most telling changes, at least from the perspective of Microsoft’s future, is that Windows Server 2008 has two versions: one for 32 bit and one for 64 bit. WS 2012, however, was only released as a 64 bit version as it seems 64 bit is going to be where Microsoft will be building future releases of their Windows Server operating systems. Server Core Introduced in the Windows Server 2008 version, Server Core is a competitor to Linux—or Unix—operating systems, but without all the features. However, with WS 2012, Microsoft is allowing users the chance to switch to Server Core and back after the installation providing a more advanced feature set than the previous version. Hyper-V 3.0 An improvement from Windows Server 2008 Hyper-V 2.x, a server with WS 2012 serves up an extensible virtual switch and live storage migration. Hyper-V 3.0 also allows, without shared storage, the migration of virtual machines. PowerShell 3.0 If you’re familiar with PowerShell in the past, then you’re going to notice changes in 3.0 that again predict the future direction of Microsoft’s servers. If you’re reading this paragraph, then you know that the use of command line interfaces over the past decade have been dwindling. Microsoft is implementing a newer version of PowerShell that has advanced features to keep up with the ever innovative cmdlets of the present and future. IIS 8 Features like pre-compilation of scripts, centralized certificate management, and granular process throttling are present in WS 2012. SMB 3.0 Server Message Block (SMB) 3.0 Direct (chosen over Remote Direct Memory Access (RDMA)) aids Hyper-V migration making SMB 3.0 one of the more potent improvements from Windows Server 2008.

What Are the Features of Windows Server 2012? 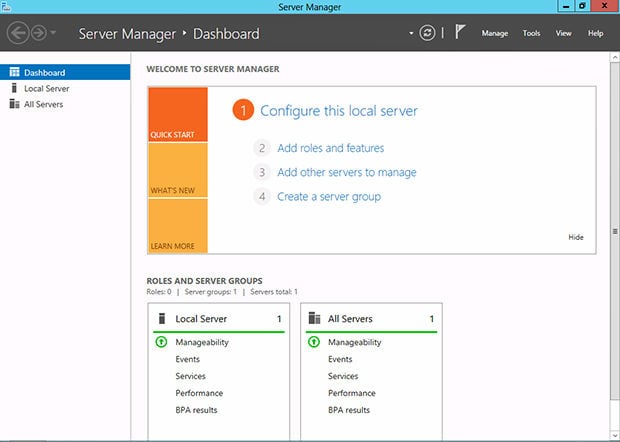 One of the new features of Windows 2012 Hosting Server Manager is the ability to create server groups. Server groups are clusters of multiple servers that are already on your network and can be accessed and managed through a new user interface. Server groups are a must for entities without dedicated monitoring software. Storage Management Microsoft describes File and Storage Services as “technologies that help you set up and manage one or more file servers, which are servers that provide central locations on your network where you can store files and share them with users.” These services are installed by default and talk back and forth with PowerShell to manage your server. Some specific file and storage applications are: IP Address Management (IPAM) With IPAM, organizations can lease, renew, and allocate IP addresses easily. IPAM also lets you integrate with Dynamic Host Configuration Protocol (DHCP) and Domain Name System (DNS) servers so that you can find and manage devices that are already on your network.

WS 2012’s licensing has moved to a processor model. Microsoft’s logic behind this is as follows: “Having a single-licensing model will make it easier for you to buy the right product for your needs and to compare the cost of alternatives (such as individual products, the CIS SKU outside of ECI, ECI and so on). Additionally, the new licensing model provides a single, familiar, and easy-to-track metric for all infrastructure products further reducing management overhead.” For Windows Server Standard 2012, if you have a two-processor server and you want to run on a total of 4 VMs, you simply purchase two Standard edition licenses and assign them to your server. For example:   With one Windows Server 2012 Datacenter license, however, you can run an unlimited number of virtual machines with that one license.

What Are the Windows Server 2012 Requirements?

Below are the minimum system requirements to install Windows Server 2012:

WS 2012 R2 was released in October of 2013 and is an updated version of WS 2012. Another update, entitled Windows Server 2012 R2 Update, was released in April of 2014 and is the current edition available to the market as of this reading. The R2 update addressed many bugs and added a few new features. To read a comprehensive list of the differences between WS 2012 and WS 2012 R2, please read Microsoft’s official Windows Server 2012 R2 comparison sheet. There are countless features, uses, and applications of WS 2012—too many to fit on one page. To read about all the features of WS 2012, you can view Microsoft’s Windows Server 2012 library PDF.
GET QUOTE
0