This Week in Getting Hacked: Jurassic Park Edition

Why Fuel Cells Could Revolutionize the Data Center 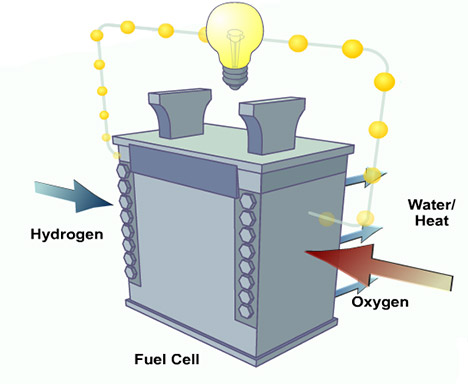 how a fuel cell works

Like something out of a Sci-Fi movie, data centers are looking to use fuel cells as their main source of power.

There’s been attempts to do this in the past, most notably with Apple’s efforts in North Carolina. But now there’s a huge effort to begin using fuel cells as the main source of power in a data center. Talk about data center efficiency, huh?

Our good friends at Microsoft are working with a startup company, Redox Power Systems, in conjunction with a grant from the Department of Energy’s ARPA-E program to test Redox’s fuel cells on individual server racks inside data centers.

What is a Fuel Cell?

Fuel cells take some type of fuel—in context, it’s usually a natural or bio gas—and mix it with oxygen. Then they run the two through a chemical reaction to create electricity. Think of it as a battery which generates energy rather than storing it (i.e. the fuel cell has battery-like qualities such as an anode, a cathode, and an electrolyte).

As stated above, fuel cells in data centers is not a novel idea, but typically if they were used for the purpose of a data center, fuel cells would be located in small clusters outside the facility. This required all that fancy power verbiage like converting AC power to DC power, but Microsoft wants to change that. They want to put the fuel cells inside the data center.

That would essentially provide onsite energy while cutting out that AC-to-DC conversion, all the while eliminating all those costs associated with it.

Without those costs, Microsoft, in theory, could pay higher prices for fuel cells—which are notorious for being quite a bit more expensive than traditional grid power.

And this isn’t a spur-of-the-moment idea from Microsoft, either. They wrote a white paper called, “No More Electrical Infrastructure:
Towards Fuel Cell Powered Data Centers,” describing their plans nearly two years ago. I guess they were just waiting for a company with enough mettle to bring the idea to fruition, which in this case is Redox.

Microsoft has already tested this technology at a test facility at UC Irvine (which used a proton exchange membrane fuel cell (PEM)). Currently, they are testing using biogas in a Wyoming test data center.

If all the testing goes well, Microsoft hopes to have fuel-cell-per-rack power.

Cost. At a large scale, fuel cells are just too expensive. Microsoft’s Director of Energy Strategy, Brian Janous, explained that the implementation of fuel cells have been “frustrating.”

But that was in the past.

Remember when we talked about that ARPA-E grant from the Department of Energy? Well, complementary, the Department’s low-cost fuel cell project, REBELS (Reliable Electricity Based on Electrochemical Systems),made a bell go off in Microsoft’s head that this technology could be more cost-sustainable in the future. But the future is now, right?

Who is Redox Power Systems, Really?

Janous remarked that Redox had prices “remarkably lower than anything out there today.” He loved what they were trying to do and wanted to provide the platform to make the technology commercial.

Redox’s innovation is using nanotechnology to create ceramic materials for a solid oxide fuel cells. This process has been developed over several years by founder Eric Wachsman, who is the director of the Energy Research Center at the University of Maryland.

Redox boasts it can deliver a low cost, low temperature fuel cell that Microsoft can use for its fuel-cell-per-rack idea.

Wachsman has described his system as being able to provide, “100 times the density per cost of current cells, one tenth the cost and at one tenth the size.” That one-tenth cost comes out to about one dollar per watt which is very comparable to grid power.

Microsoft will be getting these cells from Redox beginning in the fall of 2015 and will begin the three-year $5 million project at that time.

Microsoft showed off proof that a server can be run off of the DC power from a fuel cell.

It’s now up to the tech-giant to take this technology to the commercialized stage, which, aside from giving Microsoft a competitive edge in data center efficiency, will benefit the economic and green notions of the future. According to Janous:

“We’re bullish enough that we’re putting a lot of time and resources in piloting this tech. It could be game changing if it works. But it’s still very early.”