How the Internet of Things (IoT) Is Helping the Agriculture Sector 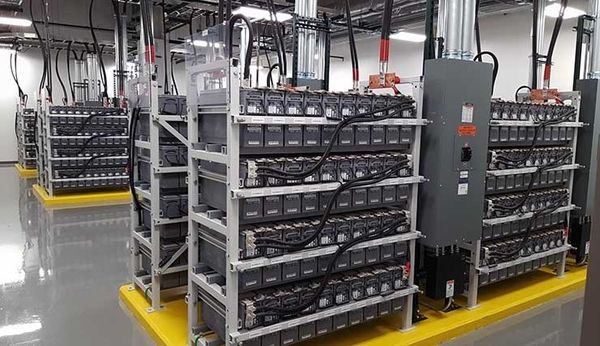 Data centers are collections of servers used to host online information so that it’s accessible from anywhere. Often, the sites we visit on the internet will be provided by a number of servers working together to protect the data stored on them in case of any issues.

Major data corporations have massive data centers all over the world; Google has 15 data centers across four continents and has a massive cloud map of servers hosted elsewhere and Facebook has nine centers, with six of these in the US.

While standard data centers will most often use Lead Acid battery cells, major corporations like these have already made the move to the more modern Lithium-ion batteries, like the one you’ll find in your smartphone. https://www.youtube.com/embed/mn-coW70goIThe central metric data center engineers are interested in is Power Usage Effectiveness (PUE) and the older type of battery, Lead Acid, struggle to compare with Li-ion technology, due to their huge size, poorer efficiency and need to be replaced much more regularly.

What Kinds of Lead Acid Batteries Are Used Currently?

The most common and recognizable Lead Acid batteries used in data centers are the Valve-Regulated Lead Acid (VRLA) cell. These often come as part of a huge cabinet of stacked batteries able to support Uninterruptible Power Supply (UPS) systems.

Other common Lead Acid batteries used in data centers include the Flooded Lead Acid cell and the Modular Battery Cartridges (MBC). The former is a very old battery kind which is often too heavy to lift alone with a long life span and the latter is a newer type designed to be easily replaceable.

So why change now? Lead Acid cells have been the industry standard for so long, what’s wrong with it? Lithium-ion technology continues to make strides that far outstrip the Lead Acid model so it may be time to bring data center energy storage into the future, but is it right for you?

The Lead Acid battery is often used because of its large power-to-weight ratio and high surge currents, especially useful in handling the huge energy output generated by swells of internet traffic. This kind of battery has worked well for data centers historically as there was more need to consistent energy output and less regard given to standard charge rate with the ability to store backup energy units to support this.

The main benefit of the Lead Acid battery, however, is its cost. Many data center operators are unwilling to switch to the newer Li-ion tech because the overall cost is much too high. Lead Acid batteries are far easier to come by and much simpler to replace.

The MBC lead Acid battery is designed to be a contained item, easily slotted into a cabinet and connected simply without the need for an engineer. This makes them an attractive option for businesses without a dedicated team of engineers.

As with most electronics, the design life specified by the manufacturer is tested in controlled conditions in a laboratory and is therefore much different from the reality of everyday use. With respect to the Lead Acid battery, standard predicted life is around 10 years, while actual service life comes more around three years.

Due to this, Lead Acid batteries need constant replacement, racking up costs in new cells and admin time over the years. Additionally, the Lead Acid cells needs to be kept at around 20 degrees for maximum efficiency, requiring companies to spend massive amounts on expensive air conditioning systems at all times to keep them at optimal temperature.

The footprint of Lead Acid systems is massive and they weigh at least three times more than their Lithium cousins, meaning systems above ground level need reinforced floors and storage space can take up several rooms, adding to rent costs.

The Lead Acid cell has been around since the 80’s and batteries have come a long way since then. Modern, state of the art batteries have a power efficiency of nearly 100%. When compared with the Lead Acid battery, the best estimate of its efficiency comes in at around 85%. This shows just how much energy wastage companies face when using a Lead Acid system when coupled with the constant need for replacement and cooling bills.

Who Is Using Lithium-Ion Already?

With most of the major tech giants having already made the switch to Li-ion, it’s safe to assume they’ve done the calculations and discovered the benefits over a Lead Acid system. However, companies like Google need server systems that can withstand more traffic than the internet even sees so their needs are likely to be far different to those smaller server hosts.

These companies are also consistently trying to make their energy output greener. They’re in a financial position to make these major changes with the intention of reducing their carbon footprint that other small server hosts may not see the worth of just yet.

The real major con to switching to Lithium-ion storage is the cost. Currently, Lithium production is super expensive and so the production costs of Lithium batteries remains too high to reason with. Factoring in the inevitable replacement costs, a Lead Acid system just makes sense from a monetary perspective.

In addition, most smaller companies are hesitant to make the switch too early. While it may be proving great for the big players, the evidence that it really works for small businesses is still thin on the ground. Considering Lead Acid has been the industry standard for decades, it’s not surprising that many companies aren’t interested in overhauling everything they know without hard evidence of the benefits first.

While the sky-high cost is hard to argue with, experts in the industry believe the cost of Lithium is about to collapse and could drop by up to 60% in the next year. If this is the case, fully replacing your data center system with Lithium batteries will become much more cost effective and could remove one of the only clear barriers to using Lithium technology.

Besides this, Li-ion batteries give a huge number of savings compared with Lead Acid cells that make them great for UPS data centers.

Li-ion batteries are much lighter and smaller than Lead Acid cells and their footprint is much smaller, saving you space no matter what your set-up is. This could save companies renting space and could also help the need to reinforce floors in battery rooms. Lithium-ion batteries also have a much longer service life of around 7 years, making savings in replacement over a longer period of time.

Lithium batteries can perform at the same efficiency at 30 degrees as Lead Acid batteries do at 20 degrees. This has meant that data centers adopting Lithium batteries are able to switch from bank-bursting air conditioning to systems which make use of outdoor air, meaning further savings to your overall maintenance. With the need for super cool areas reduced, some data centers have now done away with separate battery rooms, reducing the space your data center takes up which could shave rent prices right down.

What about Back-up Power?

In new Lithium-ion systems, the batteries are able to quickly discharge large amounts of energy and charge up much faster, essentially eliminating the need for a longer-lasting power supply. As newer battery systems become more efficient, data centers will be able to provide the levels of energy they need quickly without worrying about running out at any point.

All batteries leak energy when sitting unused. While Lead Acid batteries have an efficiency of around 85%, Lithium-ion batteries have hit an efficiency level of 99%, losing about 1% of stored energy after 24 hours. This makes them perfect for back-up storage as they will virtually be fully ready to go at any given moment.

As battery technology continues to develop at high speeds, and our lives become ever more digital, data centers will need to revolutionise to meet consumer demands and, once the cost is out of the way, there really isn’t much bringing the Lithium battery down.