The History of Augmented Reality 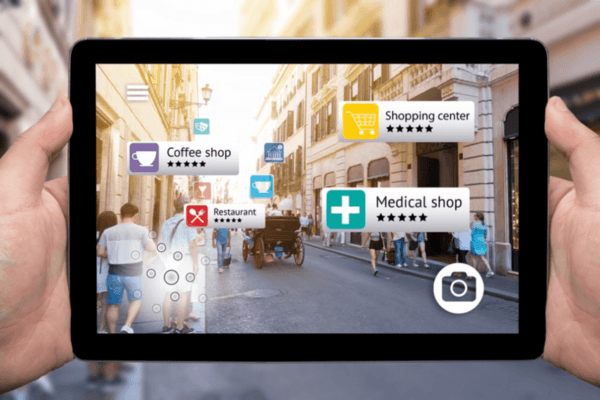 There could be some confusion between augmented reality and virtual reality, but it’s fairly simple when broken down. Virtual Reality is a computer-generated simulation that makes the user of the device feel as though they are in a different world. Virtual Reality is primarily now used in video games and 3D movies.

Augmented reality combines the real world we currently live in with virtual elements. The computer-generated augmentations are projected on top reality in a way that is supposed to help us with our different tasks and help us with being more efficient in our day today.

The combination of the two is theoretically meant to enhance one another.

Many people in the augmented reality industry believe their time is here. AR professionals believe they are about to hit the jackpot in a field that is growing tremendously at a rapid pace. Some even believe this industry could be the next success story like we all know of Apple today.

Investments in augmented reality have also been on the uprise, and seem to be trending upward. This could potentially represent the need and want for this type of technology.

Together, augmented reality and virtual reality have grown tremendously in investments this year totaling $1.1 billion.

But before we discuss the future of these alternate realities, let’s dive into the history of Augmented Reality.

When Was Augmented Reality Invented?

In 1968, a Harvard professor and computer scientist by the name of Ivan Sutherland invented what he called The Sword of Damocles. He invented this first sort of augmented reality device with his student, Bob Sproull.

The Sword of Damocles featured a head-mounted display that hung from the ceiling. The user would experience computer graphics, which made him or her feel as though they were in an alternate reality. This technology may be considered closer to virtual reality than augmented reality.

One of the next big developments in augmented reality was in 1974 by Myron Krueger. The project was called, Videoplace, which combined a projection system and video cameras that produced shadows on the screen. This setup made the user feel as though they were in an interactive environment.

In 1992, Louis Rosenburg from the USAF Armstrong’s Research Lab created the first real operational augmented reality system, Virtual Fixtures. A robotic system places information on top the workers work environment to help with efficiency. This system could be thought of as an early version of what most AR systems currently do today.

In 1994, the first theater production to use augmented reality was created. “Dancing in Cyberspace” presented acrobats dancing in and around virtual objects on stage as a piece of art was produced by Julie Martin.

In 1998, Sportsvision uses the 1st and Ten line computer system. This system showed the original virtual yellow first down marker during a live NFL game. A variation of this virtual first down marker is now a norm in all televised football games today and is a big part of the augmented reality history.

An important advancement in the augmented reality technology happened in 2000 when Hirokazu Kato from the Nara Institute of Science and Technology in Japan created and released software called ARToolKit. Through this software, one could capture real-world actions and combine it with interactions of virtual objects.

In 2003, the NFL used the popular Skycam, which was used for aerial views of the field to insert the virtual first down marker.

Augmented reality has come a long way since its early conception, and the advancements in the past five years have been even more promising.

We really can’t talk about the future without first looking at the past. Check out this great infographic from augment.com detailing the full history of augmented reality:

In 2013, Volkswagen uses augmented reality as their car manuals. The use of the MARTA app through the iPad can help users view the internal workings of the vehicle so the service mechanics know what they are dealing with.

The MARTA application can also show successive instructions to help mechanics with the projects they are working on. It can even help with replacing parts. It can even be as specific as which direction the parts should be facing. The MARTA app can be used for more cosmetic projects as well, including seeing how different color paint jobs can look on your vehicle.

In 2014, the Google Glass is revealed and is made available for consumers. The Google Glass wasn’t as successful as developers hoped it would be, but it did show the potential of what wearable augmented reality could be. The second iteration already seems to be more promising and more useful.

Instead of using the Glass to scroll through social media and other applications, factory workers are using the technology to help with everyday work. It helps walk the workers through their daily tasks and be more productive and efficient.

In 2016, Microsoft introduces the next iteration of wearable augmented reality. The HoloLens seems to be everything that the Google glass wanted to be, but certainly not as discreet and wearable in everyday life and is undoubtedly more expensive. The technology advancement between the two is unquestionable, but the price range of $3000 and $5000 are out of most people’s budgets.

Augmented reality has also infiltrated the gaming world as well. The Nintendo 3DS comes with AR Cards that trigger integrated AR games. Just like Pokémon Go, users will see your favorite characters in the same room as them.

Snapchat has even created its own AR games that are built right into the app. The use of facial gestures controls all your movements in each game.

What Are the Latest AR Utilization Trends in 2022?

Between 2016 and 2021, there wasn’t as much noteworthy innovation in the field of AR. While there were some advancements in AR, such as improved hardware and software, most of the developments were very much gradual rather than revolutionary. Companies continued to experiment with various use cases for AR, such as in gaming and retail, but these applications failed to gain widespread adoption. Many of the early promises of augmented reality, such as increased efficiency and productivity weren’t fully realized during this period, but the concept of the metaverse has brought AR back into the spotlight. AR is now being implemented in various ways.

Augmented reality technology and its application has grown in many ways. Augmented reality is now being utilized by various industries in a myriad of ways including product preview placement, virtual showrooms, in-store shopping help, real estate, interactive user manuals, and remote work facilitation. With the metaverse on the horizon, augmented reality looks to play a vital role in this area as well.

Augmented reality is being utilized by many different retail companies. The technology is used to show shoppers how certain products like furniture will look or fit inside their space. This allows potential buyers to see how something like a couch will fit in their home without having to bring the product home. AR technology gives users insight without the hassle of buying and returning an in-store item.

Because augmented reality technology overlays on top of a real environment, retail stores are also leveraging the technology to help shoppers navigate their stores. It can help customers find everything they need in less amount of time. Applications can even how various discounts that may not be advertised. AR technology can make the shopping experience more fun and more convenient.

Another way that augmented reality can be applied is for interactive user manuals. User manuals often with various products that need an explanation of how to build the product or how to use the product properly. Many of these user manuals are ignored and even discarded. Sometimes it feels like the directions are even more complicated than figuring it out on your own. Augmented reality can be useful especially when it comes to sequential directions. Being able to interact with the product and having detailed directions can also be beneficial.

One of the biggest buzzwords in recent times is the metaverse. The metaverse aims to be the next iteration of the internet that also combines gaming, social media, communication, retail, and “live” events. The metaverse looks to be a shared digital ecosystem layered on top of the real world, which makes augmented reality an essential technology for the future of the metaverse.

The Future of Augmented Reality

Augmented reality is a technology that has been incorporated into many different aspects of our lives. But I believe that AR has more potential than it is given credit for. The use of AR in games such as Pokémon Go have been huge success stories, but the reality of AR and the potential it has to impact our lives can’t be ignored.

AR can transform our lives for the better. There are cars that are already incorporating displays that project your speed, GPS routes, and other information that one may need or merely want onto the windshield of the car more easily visible than it is currently.

The current utilization of augmented reality is far from merely fun and games. It can be applied in a multitude of ways that can be beneficial for many organizations in various industries. As the technology continues to be innovated and improved, we will see the true potential of AR. As we move closer to the metaverse—augmented reality will be vital to how we interact in this new virtual world.

The reality is, as augmented, as it may be, the advances in technology are heading in the right direction and will revolutionize the way we live for the better.