Live Streaming of Planet Venus via NASA, Next Show in 2117

Why the Fcc Is Focusing on Startups

What is Hotstagram, and Why Do They Need a Dedicated Server?

Instagram, a company that Facebook recently bought for $1 Billion, has a new competitor in the market. Hotstagram.com is a website where two images show up, and users can choose one of the photos to rate the “hotness” of each image in an attempt to find the “hottest girl in the world” (the male version will be launched soon).  Sounds a lot like Facemash from The Social Network, doesn’t it? Remember when Zuckerberg crashed the servers by creating so much traffic on the website? That’s what will happen if Hotstagram.com doesn’t switch over to a dedicated server for their needs.

Right now, Hotstagram.com shares an IP address with 37 other domain names, and is hosted on a shared server, along with 1,223,510 other registered websites. The images are pulled directly from Instagram and are not saved on any other servers. As their traffic increases with exposure, their shared servers will not have enough resources to handle the activity, which in turn- will cause a high bounce rate. As of Wednesday morning, June 6, 2012 Hotstagram’s Twitter account had 119 followers. Pretty impressive considering that they created their Twitter on Monday morning. By 10 a.m. Wednesday, the website was pulling in 500 ratings a second.

A dedicated server will allow Hotstagram to keep their traffic moving, pull images faster and most-of-all- a secure server where they aren’t sharing an IP address that could possibly land them on Google’s bad side.  It’s important to have a dedicated IP address along with a dedicated server for many reasons, one of which is safety from getting blacklisted on Google’s search results. Hotstagram can be described as addictive, fun, and as Carson Daly said on 97.1 AMPRadio (Los Angeles) this morning, “It’s always the simple ideas, that make it big.” 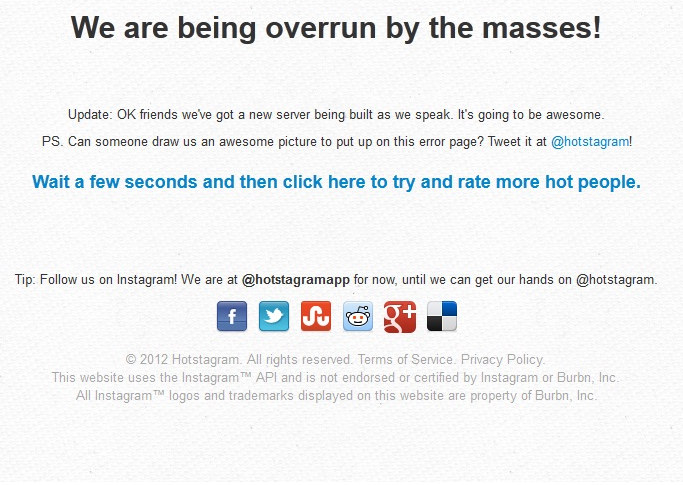