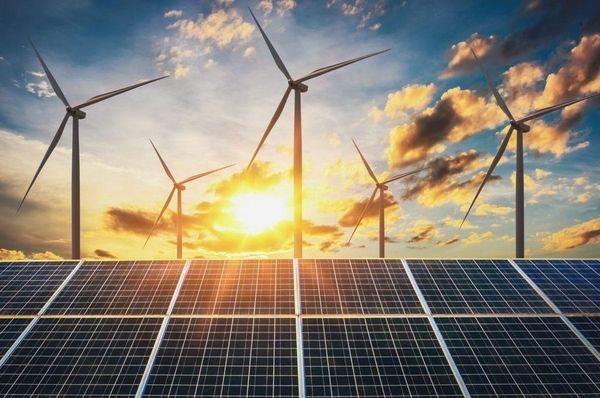 The environmental impacts of data centers are something that is discussed quite often. The United States alone is projected to use about 73 billion kWh of power in 2020. And as “smart” technology continues to grow, so will the demand for data storage. Companies understand that data centers have an extremely large carbon footprint as currently structured, which is why some of the biggest companies are looking into using clean renewable energy options.

The Biggest Companies Are Going Solar

Some of the biggest and most well-known businesses are turning to solar energy as a way to power their operations. As of 2018, in order, Apple, Amazon, Target, Walmart, Switch, and Google lead the way with the most solar capacity installed.

Although Apple may be leading all businesses in this regard (powering both of their data centers and it’s main offices with nearly 400MW of capacity), Google has just announced a new data center using a 350MW solar plant and a 280MW battery storage all powered by clean renewable solar energy. Google is investing $600 million into its upcoming data center in Henderson, Nevada.

Pegasus Group Holdings has also announced a $3 billion data center near Kingsman, Arizona. This will be the largest solar-powered data center in the world. A 717-acre solar field providing 340MW will power a network of modified cargo containers holding 500 – 1000 servers each.

And Microsoft is also following suit by pledging to be 100% carbon-negative by 2030. This means the company is planning to remove more carbon from the environment than it emits. Microsoft states that all of its data centers and buildings will be 100% renewable by 2025. Google and Apple have both stated they have already reached the 100% mark.

The Cost of Emissions

Microsoft is responsible for 16 million metric tons of emissions per year, which includes its data centers, making electronic components, and the energy consumption of those using Xbox gaming consoles at home. Greenhouse gases like carbon dioxide can cause climate change, and create air pollution contributing to respiratory diseases. It can also cause extreme weather, increased wildfires, and food supply disruptions.

So a company as big as Microsoft pledging to not only reduce its carbon emissions but to be carbon-negative by 2030 is a big deal. If more companies were to strive for this outcome—the world could drastically change.

What Are the Advantages of Solar Power?

Solar power is a suitable solution for data centers for many reasons. The cost of solar power is stable, while the cost of fossil fuels has many variables and is always fluctuating. Solar power is also self-contained and for the most part self-managed, which means it not susceptible to spikes or blackouts. It also provides a secured capacity.

All businesses and data centers, to be specific, should be looking into going green to save the environment.

What is a Realistic Goal for a Solar-Powered Data Center Industry?

Although some of the biggest companies like Google and Apple have stated they have reached the 100% renewable energy mark for their companies, other companies and businesses globally are still far behind. In 2019, a global survey was conducted asking data center professionals to predict what percentage of a data center’s power will come from either solar or wind by the year 2025. More than 800 data center professionals predicted a number of 13% by 2025.

While certain countries are taking away assistance, others are pushing towards reaching a higher percentage of renewable energy consumption. The European Union has recast a Renewable Energy Directive to reach 32 percent. Companies like Apple, Google, and Amazon, along with certain countries still pushing for renewable energy gives the industry optimism for a greener future. The data center industry’s renewable number may not be as low as 13% or as high as Google and Apple’s numbers, but there is still optimism of getting the entire industry as a global unit to an average of 20% renewable by 2025.

There are many difficulties regarding harnessing renewable energy. One of the main difficulties is that sources of renewable energy also have their own variables. Collecting wind or solar power isn’t constant. And after you have successfully done so, you need to use that power rather quickly or store it in battery source. Artificial Intelligence is being used to improve and optimize renewable energy operations.

Artificial Intelligence is being used can analyze the extensive amounts of meteorological data to make predictions of when to expect a charge. Using this knowledge can serve managers by helping them understand and calculate the extent of gathering, storing, and distributing renewable energy.

AI can also help manage the distribution to storage and balancing the surges of power by analyzing the grids before and after they are absorbed. This will help reduce power congestion. AI systems can also be used to regulate and control how and where the power is allocated. Numerous energy companies are already using AI to improve their systems. Artificial Intelligence is already being used in current data center operations, but it will also be one of the things that help bring renewable energy to the masses.

What was once known as “alternative” energy sources, are now known as “renewable” energy sources. People have come to realize that these sources shouldn’t just be looked at as an alternative but as a necessity. Using renewable energy reduces greenhouse gas emissions, reduces fossil fuel imports, and will help progress the local industry and create new jobs.

As the world continues to move into this mindset, this just means that solar power and other renewable energy will be the future of data center operations. Some of the biggest companies including Apple, Microsoft, Google, and Amazon are already leading the charge.