Online Learning Can Take Your Career to the Next Level

The Ascendancy Of The Hybrid Cloud 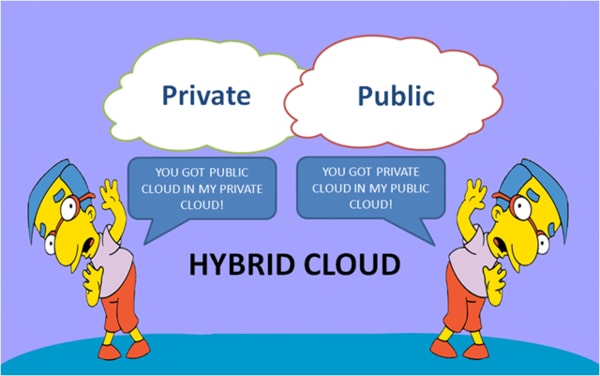 The hybrid cloud is increasingly popular for large businesses. We discuss how enterprises can best leverage both public and private clouds with a hybrid cloud.

Most of the conversation concerning the cloud tends to revolve around cheerleading for one particular implementation model. The focus is on either the benefits or the drawbacks of public and private cloud modalities.

We hear that one or the other is the savior of enterprise IT. But, a more sober analysis reveals that, as with many false dichotomies, the truth lies somewhere in-between.

Small and medium businesses are currently driving the uptake of public cloud platforms, which is leading to a sort of cloud boosterism focused primarily on the public cloud. However, the concerns of large enterprise businesses are not just different in size, they are of a different type, which is why when it comes to such large companies, the hybrid cloud, which combines both modalities, is the way forward.

Why The Private Cloud?

The defining characteristic of the private cloud is that the underlying hardware is dedicated entirely to the use of one organization and is usually incorporated into that company’s own network behind the firewall. We can quibble with some aspects of that definition and the concepts are fuzzy, but in basic terms this is what we mean by the private cloud. The hardware is usually either located in an in-house data center, collocated, or otherwise paid for by one organization.

The private cloud brings many of the usual benefits associated with virtualized infrastructure, including easier deployment of servers and increased utilization of hardware — in theory at least.

Enterprises choose the private cloud because:

Why The Public Cloud?

Public cloud platforms provide server and networking infrastructure using virtualization or container technology running on hardware that is shared between multiple organizations, or at least, there can be no guarantee that any specific set of infrastructure is used by one company alone. The public cloud abstracts from the underlying hardware and provides an interface for the programmatic deployment of virtual servers and network infrastructure.

The benefits of the public cloud have been well rehearsed, but they include:

Hybrid Cloud: The Best Of Both Worlds?

You’ll have noticed that many of the benefits of public and private cloud are in opposition to each other. Although the public cloud can be just as secure as private, in many cases it’ll be difficult to convince conservative decision makers sufficiently to get them to buy in. Private cloud can involve large up-front investment in both IT management and hardware; the public cloud does not. The public cloud frequently requires a new way of doing things that may not align with previous investment in legacy systems.

There are some security concerns as listed by the IDG Research Services survey, which drew from 145 of the top IT executives on the matter: “More than three-quarters of the respondents cited four specific security-related concerns about hybrid clouds: data loss or leakage, insecure interfaces and APIs, account or service hijacking, and threats arising from unknown risk profiles. By comparison, the highest concern cited about private clouds was “malicious insiders,” and just 63% of the respondents said they were very or somewhat concerned about that possibility.”

But, in each case those benefits are very real and leveraging them is in the interest of most large companies. Obviously, a hybrid cloud environment is the solution and offers:

The question should no longer be: “Should we choose public or private cloud deployment?” Cloud technology has matured to the point where businesses should be taking advantage of the hybrid cloud and determining whether to use public or private based on their specific needs, leveraging the best of each to create a hybrid system that satisfies all use cases.

About the author: This guest blog was by Brett Haines of cloud hosting provider Atlantic.Net. Brett Haines is the Director of Operations at Atlantic.Net with a focus on Facilities, Customer Support, and supporting Research and Development.

Brett Haines has not set their biography yet