Houston We Have A problem, Patient ID Theft

Microsoft Windows users are always faced with time consuming upgrades, yet for most of us, upgrading our software remains a necessary evil to stay with the times. Of course you can always rock that old version of windows XP until the cows come home, or until Microsoft renders it completely obsolete. But what if you could forgo the suggested retail price of ???? and upgrade your existing operating system for 40 bucks? You may as well bite the bullet on this and become an early adopter of Microsofts latest endeavor; Windows 8.

In comparison to the $199.00 retail price of a full version of Windows 7, $40 sounds like a super deal. Even when compared to Apples reported $20 upgrade to it’s upcoming OSX Mountain Lion software.

In the past, Microsoft has relied on the name brand PC manufactures to sell their latest and greatest. Buy a new PC, get the latest version of Windows. But declining sales in the consumer market has put a dent in Microsofts quarterly revenues. To offset this, Microsoft has responded by bringing down the cost dramatically ($40 from the time of launch this fall to end of January 2013) with hopes to gain more users. Essentially, Microsoft has re-engineered windows so that it plays nice with it’s users other personally preferred technology, such as smart phones and tablets and social networking applications.

Apps You Say? Why Yes

Within it’s attempt to gain more users, Microsoft is seemingly shifting emphasis on big PC revenue to cheap upgrades to Windows 7, Vista etc. Apps, which have taken over our lives via our beloved smart-phones and tablets have really influenced windows 8. From the simplified start screen menu, to its displayed application tiles to more personalized content. Microsoft’s attempt to keep the user experience streamlined and in control is ever more apparent. 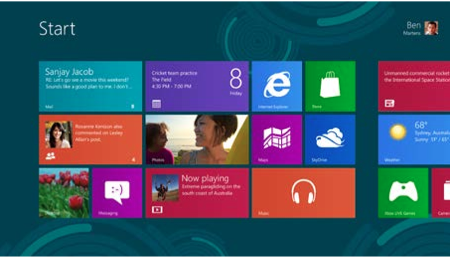 Our Heads In The Clouds

In addition to it’s emphasis on Apps and seamless outside interfacing with personal technology, Microsoft 8 features new and improved Cloud connectivity. Perhaps still a buzzword, the cloud, is simply a way to store our information remotely on an network of Windows dedicated servers. The ability to access ones files, contacts, personal information and to share with each other on the go from various different computers will be an added selling point. Pretty soon, we’ll all have our head in the cloud storing and accessing our precious data.

For most if it’s dedicated business users, Microsoft 8 promises to maintain the look and feel of Windows 7 and Vista with regards to its desktop layout. Lets face it, upgrading your software is stressful. Furthermore, starting over from scratch and learning the new features of Windows is a dreaded mis-adventure. Though Microsoft still hopes to ease the transition for it’s users, develop it’s street credentials amongst those of us who possibly went over to the dark side (Apple), stimulate sales, all with a limited $40 software upgrade? Sounds like a tall order Microsoft.For the worlds sake, we sincerely hope Windows 8 becomes a hit. Best of luck to those of us who choose to upgrade later this year.