How Researchers Are Ending to Transoceanic Fiber-Optic Bottleneck

For Colocation Providers, Data Center Efficiency Is a Bit Different 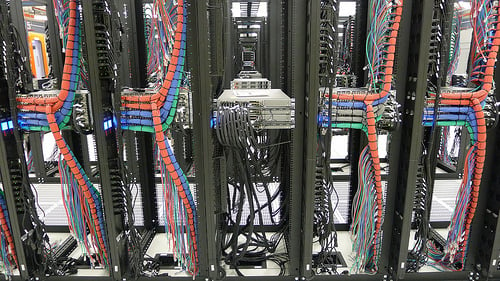 That’s because data center efficiency must have multiple definitions to fit each unique infrastructure and building.

Where one data center might be “modern” and have all the top-of-the-line specifications, another might be running on decades-old equipment. Data center efficiency would mean something different in both of those data centers.

But what if we bypass infrastructure and hardware and start thinking about software? There, data center efficiency would mean something different as well.

Cloud-specific data centers will need to be operated differently than others, say colo-based centers.

The latter is particularly important to us, so let’s focus on how data center efficiency is a bit different in colocation-based data centers.

There’s a magic number in data centers for power usage effectiveness (PUE) and that is 1.0. Some data centers come close, like Facebook’s Prineville center which boasts a 1.07.

But colocation providers find reaching that number more difficult because of the unpredictable nature of colocation. Space is rented out in racks, and what’s in those racks is completely random—the colo provider doesn’t really have much control over it. Because they don’t own what’s inside their racks.

Data Centers in general have been trying to decrease their PUE number for a while now. Check out this video from two years ago stating that data centers with a PUE over two will be obsolete in five years:

Therefore, colocation providers cannot crank up the air temperature intake temperatures—increasing the PUE number—because they can’t risk damaging the equipment inside which doesn’t belong to them.

There are ways around that, however, as some data centers have deals with their customers where they can get different reliability and power densities. The benefit of this is the immense efficiency improvements over the other types of data centers which get aggregated into one space.

The PUE never reaches Facebook levels, but it’s still impressive under the circumstances.

But colocation providers are not giving up and are always looking, perhaps incentivized for better ways to improve. In the UK, there’s a Climate Change Agreement (CCA) that gives data centers tax breaks on the promise that their PUE will be better over time. This cut, according to law, is for cloud and colocation providers only (leaving out in-house centers) and around 100 companies have already signed up. Hopefully something like this comes to the United States soon.

Returning to Facebook for a moment, they publish a live feed of their PUE number—but not many colocation providers broadcast their PUE number as such. There’s one in Kent, UK, Custodian Data Centers, which currently hovers around a 1.2 PUE.

The technical director, Robert Williams, has stated that his Tier IV center’s feed has its “ups and down” dependent on outside influences like weather, site configurations, etc.

Williams also explains that his center will most likely not be able to get much closer to that 1.0 number due to having a dual path power supply with double the number of uninterruptible power supplies on standby.

Let’s think about this for a second: data centers consume roughly three percent of the United States. In 2013, that equated to 91 billion kilowatt-hours.

Based on the above, colocation-based data centers consume the most energy due to being less flexible than the others (i.e. Apple, Google, Microsoft, Amazon, etc.). The sway of colo could affect the grid towards the future of very-efficient data centers.

Location is quite important for colocation. Obviously, people want their machines where it’s most convenient. For the majority of businesses, this means that their collocated servers will be housed in a data center within the tight confines of a city—such as Los Angeles, London, New York, etc.

In those cities, it’s quite difficult to erect a wind turbine or something similar as roof-space is all you really have (and despite the ridiculousness of a wind turbine on a roof, that’s usually where the generators are).

If colocation centers were somewhere remote, more innovative and efficient PUE measures could be taken, but alas, this is not the case.

And that’s where creativity really comes into the forefront. There’s a colo provider in Stockholm that uses seawater for cooling as well as being an early-adopter of cold-aisle containment.

As we’ve written about earlier, colocation is not dead, but rather it is growing. Eventually, the thought is, that colocation data centers will be held to the same efficiency standards as those mega “hyperscale” cloud centers (the Googles, Amazons, etc.).

But at the end of the day, servers are necessary to the economy and business of nations across the globe. You can’t expect businesses to simply stop using their computers. The trick is to find more innovative and cost-effective ways to improve the infrastructure that’s already in place.

Whether it’s a colocation based data center or otherwise, using three percent of a nation’s power bill on data centers is a big burden to carry.

It’s time to fix that.