This Week in Getting Hacked: Steam Room Edition

The History of the Electric Car 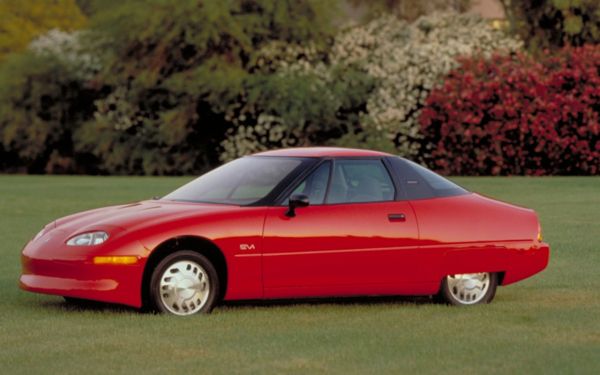 Electric cars have been around since the dawn of cars itself. Somewhere down the line, petroleum vehicles took over and started dominating the market. That was because electric cars weren’t powerful enough to keep up with them. Today, we see Tesla’s new electric car, the Roadster, strike with power and efficiency. Where did electric cars go bad and how did they get reintroduced into the market? Let’s step into our time machines and explore the history of electric cars.

In 1832, Robert Anderson invented the first electric carriage. It was powered by non-rechargeable primary cells. It was a small carriage that looked like the first version of the rail carts you see in San Francisco.
A couple of years later in 1835, Thomas Davenport essentially created the first electric vehicle that used a small locomotive as it’s engine. This type of vehicle didn’t need to stick on rails, as it had actual wheels and a way to control them.

The first-ever electric car was invented by William Morrison. It was advertised as being a six-seater, so you could take your kids and their teammates to their soccer game. What’s cool about this sweet ride is that it could go as fast as 14 mph! An Impressive feature considering this hot piece of metal was made in the 1890s.
For the next 20 years, electric cars were very popular amongst Americans. In cities like New York, Boston, and Chicago, one-third of vehicles were battery powered. Electric taxi cabs were dominating all over busy cities as well.
These battery-powered vehicles were doing well due to a few factors. Compared to their competitors, they were quiet, easier to maneuver and didn’t release a foul odor. On the other hand, gas-powered cars had gears that needed to be switched and needed to be started up with by a hand-crank.

Despite the differences, the real competition came when Henry Ford built the Model T car which let drivers ride farther and faster. Electric cars lacked this power and drivers wanted to travel longer distances. This eventually led to the downfall of the electric car.

The decline of the electric vehicle was due to an abundance of petroleum and the fact that technology improved for gasoline-powered cars. It became obvious that gas cars were superior to electric cars.
As more gas stations appeared, less electric cars would be seen on roads. By the time it was 1930, there were no electric cars to be seen.
Decades later, when gas prices were soaring, and oil is very rare to find, the U.S. Congress allowed the Department of Energy to help fund motor companies to rebuild electric cars. When the first set of electric cars were re-released, they were very slow. Not only did they hit a whopping 45 mph, but they also lacked distance which meant that these cars needed to be recharged every 40 miles.

One of the most known electric vehicles at the time was the GM’s EV1. This car didn’t sell well, but it did have a huge following after. The EV1 was able to hit 50 mph in seven seconds and have a range of 80 miles. The car was very expensive to build and never became commercially available because of this. In 2001, the EV1 was discontinued.

What’s cool is that NASA used an electric-powered Lunar rover during their first landing on the moon. I guess this was the government’s way of making a huge shoutout to electric vehicles. Despite, government efforts in trying to bring back battery-powered cars, they weren’t very successful due to slow speed and shallow distances. Technology would have to improve if we wanted to see hybrids pack distance and speed. At the same time, hybrids were being released and served as a better alternative to electric cars.
I know this is article is about the history of electric cars, but mentioning the Prius is important because it gave electric cars a chance. The best feature about hybrid cars is that they have the best MPG anyone could ask for. There are two main downsides: they’re still slow and there aren’t many charging stations on the go. However, when Tesla Motors produced their own electric cars, it ended up being some of the best cars on the market.

Tesla Motors changed the face of electric cars. They were faster and went even farther distances than any hybrid or gas-powered car ever could. I’m talking about an average range of 250 – 300 miles before it needs a full charge and a horsepower of 518. The Tesla Model S is capable of all these feats. Not only are electric cars becoming more powerful, they also look like they’re going to be paving the future for the automotive industry.

The Department of Energy is also giving a helping hand to numerous automotive companies build more environmentally-friendly vehicles. In the short-run, it looks like electric cars are going to keep improving as the government will help pay for automotive companies to keep venturing to find new technologies.
But what does this mean for gas cars? If electric cars keep on being treated well, then maybe it does have potential to kill out gas cars. With batteries on the rise, it is possible that lithium could replace the hunt for oil.