What Was the First Computer Bug? 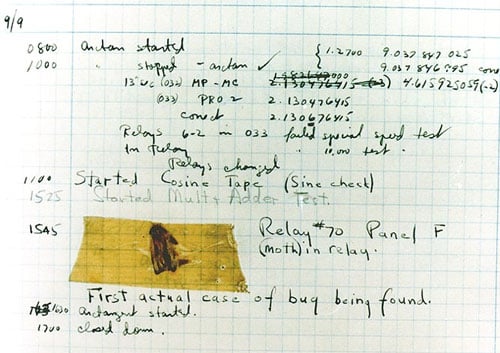 A Brief History of Technology Vernacular

Let’s talk a little bit about a behavior called transverse orientation. No, this isn’t a technology term or anything that you should be that familiar with, unless you buzz around at night in odd patterns.

Transverse orientation is how some insects navigate. They do this by flying at relative angles in relation to distant light sources.

Before electricity, these winged-pests would traverse the night’s sky using the light of the moon. It was simple—there was only one light source.

Today, however, these little buggers get understandably confused—which is why they fly into your house the moment you open your door, despite being uninvited.

Why am I talking so much about insects on a technology blog? So that we can better understand the origin of the technology term, bug—of course.

More specifically, did you know that the very first instance of a computer bug was recorded at 3:45 pm on September 9, 1947?

It was a moth, and it’s been preserved behind some adhesive tape for nearly 70 years.

Grace Hopper, a member of Harvard’s programming team working on the Mark II Aiken Relay Calculator, was working late at night with the windows opened (no screens). The moth—roughly four inches in wingspan—was attracted by the light of the room and heat of the calculator and nestled its way into the machine…where it was beaten to death by one of the relays.

Hopper’s team took the bug out of the relay, taped it to their logbook and labeled it as the “first actual case of a bug being found.”

While the term “bug” has been used before in regards to problems with machines / engineering, most famously by Thomas Edison, Hopper’s team popularized the terms “bug” and “debug” as part of the computer programming vernacular.

So the next time you encounter a bug while playing a game, or coding your next project, be glad you don’t have to pull out an actual dead moth from your computer (although that does sound easier, doesn’t it?).