Editor’s Note: The original article (posted below the line) was published on December 7, 2012. An update on the subject matter was sorely needed….

There’s a common problem in the world of software defined networking systems (SDN): issues with latency and I/O bottlenecks. Plexxi is aiming to help data centers around the world with this problem through a new software called Plexxi Control. 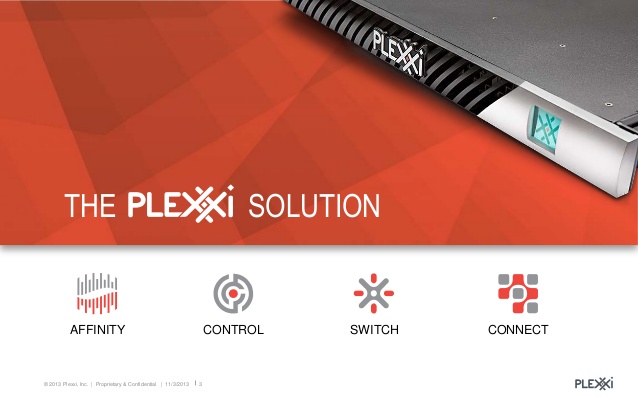 The interface is very user friendly, allowing users to actually see the Plexxi Switches and how the data center resources are being used. Scalability and optimized performance are achieved through algorithms of course, and the latency issues from before are now a thing of the past.

Plexxi Control is easy to install, and makes the overwhelming amount of data that centers go through on an hourly basis easier to sift through. Cisco Global Cloud Index showed that the majority of data center traffic stayed within the data center (over 4 zettabytes this year alone), and it’s only expected to increase over time as more companies rely on cloud computing. So Plexxi seeks to avoid the inevitable: clogging and slowing.

The software also works hand in hand with the Plexxi Switch hardware, which is the first SDN-based Ethernet switch, which is a great investment for data centers who need assistance seamlessly assigning traffic.

Every so often software companies attempt to tackle a problem by offering a groundbreaking solution. Some are more successful at this than others. Thankfully, a startup company by the name of Plexxi has come up a software solution that will make SDN (software define networking) networking run more smoothly and efficiently. Here’s a peek into Plexxi’s latest software.

Every so often, software companies attempt to tackle a problem by offering a groundbreaking solution. Some are more successful at this than others.

Managing workloads within a data center environment has become increasingly complex, especially when multiple devices are trying to access the same applications. How do you cut down on latency and prevent I/O bottlenecks?

Thankfully, Plexxi – a networking startup company has unveiled its new software defined networking system (SDN) designed for virtualized cloud networks within data centers. Plexxi claims that efficiency within a virtualized environment can be achieved by managing traffic based on workload. Here’s a peek into the company’s latest software offering:

Plexxi Control runs on a dedicated server and is responsible for balancing workloads between connected devices. The magic is that Plexxi’s software automatically detects the quickest way to connect a device based on real time capacity requirements and processing times. Advanced algorithms are utilized to achieve proper scalability and optimized performance no matter how busy network traffic may be. Plexxi will offer low latency switches through a highly efficient optical interface.

Ethernet connections are good for 10Gb and 40 Gbps. To Plexxi engineers, SDN is all about defining system requirements then adapting infrastructure based around those needs. Virtual networking is an every changing environment, but having smarter software will make everything run much more smoothly and efficiently. Aside from being technically savvy, Plexxi’s engineers also have a fine sense of humor. Check out this witty video from the company’s you tube page:

As Director of Business Development at Colocation America, Albert A. Ahdoot leads all sales efforts by intelligence gathering, drafting, and enforcing sales policies and processes, as well as implementing and evaluating new business strategies. His thorough understanding of data center technology and efficiency enables him to anticipate clients’ needs and to position Colocation America appropriately within the very optimal technical marketplace. One of Ahdoot’s most notable achievements came about in 2000 with his founding of his own internet marketing company, Mushoo Inc. While establishing himself as a successful entrepreneur, he simultaneously became a shareholder of UnitedLayer where he exceeded sales and marketing goals through his business development efforts. A native of Southern California, he spends his time outside of work playing basketball or volleyball, hiking, reading tech-related publications, and supporting various philanthropic organizations.
Share Post: