What Is a Lights out Data Center?

How Hybrid Cloud Solutions Can Work for Your Business

The Technology behind Virtual Sports Fans 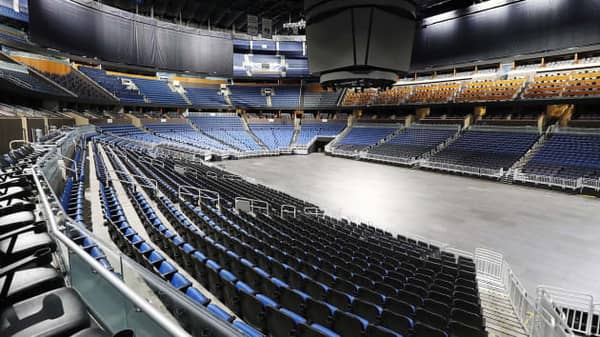 The world started to hear about Covid-19, the novel coronavirus, in December of 2019. The turning point for many people was when the sports world was put on notice when a live nationally televised basketball game was canceled moments before it started. The National Basketball Association also made a statement it was halting the season until further notice. It wasn’t until four months later when the NBA season was able to restart. All of the different sports leagues have taken different routes to restart their seasons, but because of how this particular virus is spread, the one thing all of the sports leagues have in common is the lack of fans in the stands. This article discusses the technology behind virtual fans.

What Do Sports Arenas Look like during a Pandemic?

These are unprecedented times for everyone, and it is no different for professional sports leagues. All of the different professional sports leagues were on different timelines in response to the pandemic. This is why all of the different leagues are trying to figure out what works best for them. Some sporting leagues such as Major League Baseball has opted to use cardboard cutouts of their supporters. Fans are able to purchase cardboard cutouts of themselves to be placed in the stadium so the players will feel the support. These cutouts can also be seen on television during the broadcast of the game. Although the MLB will use cardboard cutouts in-stadium, certain television networks will use technology to fill the stadiums during the broadcast.

The NBA has decided on a more technologically advanced crowd both in the arena and during broadcasts. If you’ve watched any of the NBA games since the restart of the season, it may seem fairly normal. While there were no real in-person fans at the arenas, some viewers may not have noticed this at all. The NBA partnered with Microsoft Teams to make playing in the NBA restart “bubble” and watching the games seem fairly normal. Because in-person fans are not allowed at the arenas due to the novel coronavirus, Microsoft wrapped the area with seventeen-foot LED screens that displayed virtual fans.

The way the NBA broadcasts these games are also somewhat normal. Once in a while, the camera cuts to shots of celebrities and other fans tuning in from home as virtual fans in the arena. Music, arena sounds, and fake cheers are also added to give the players and the viewers a “more normal” experience.

To be fair, the crowd noise the players and viewers are experiencing isn’t completely fake. Those who have been lucky enough to score tickets to be in a virtual crowd have options of activating a  “tap to cheer” button to show support or lack-thereof to the opposing team. Fans are given the option to click buttons to raise the stadium cheer volume for the teams. Although fans aren’t physically there, the NBA has given them different ways to stay engaged with their favorite teams.

Many people thought the NBA restart games would more so resemble how the NBA summer league games look, but with the right technology, the NBA has done a good job of giving the players and fans a worthwhile experience during these unprecedented times. The LED screens even display digital logos and advertisements like they do in the old pre-pandemic arenas.

If you are like many others in the workforce, virtual offices are what’s keeping coworkers connected. While the world quarantines and isolates itself in their homes, certain technologies are allowing officemates the ability to communicate live and in real-time. Some of the most popular video conferencing applications are Zoom, Google Meet, and (the NBA’s communication of choice) Microsoft Teams.

Although it isn’t the one my team currently uses, Zoom seems to be the most popular of the bunch. It’s even the latest product that has become a verb. Much like how people use “Google” as an interchangeable term for searching something on the Internet, people are now using “Zoom” as a synonym for videoconferencing.

All of these different video conferencing applications have their pros and cons. All of these applications also come at different price ranges. Zoom meetings start at $14.99. There is a version of Microsoft Teams that come with Microsoft Office 365. These versions start at $5 per person each month and go up to $20 a person per month depending on what you may need. Lastly, Google Meet starts at $6 a month and can go up to $25 per user depending on storage, security, and management options your team may need. All of these video conferencing apps offer the same connectivity with differing features but can all get the job done. It’s all about you and your team’s preferences. For more of the best technologies during social distancing to keep you connected and entertained—visit our blog.

The world has changed in many ways due to the pandemic. Numerous businesses were forced to shut down either temporarily or permanently. Even the sports world was turned upside down and was forced to take a break from playing and broadcasting live games. One thing that has been apparent as the world slowly opens up again is that technology has not only kept the world connected, but it is also what is helping bring everything back to normal. The National Basketball Association has put in over $150 billion into season restart, creating a safe environment and making games feel a semblance of normality.

Although we may not have that type of budget as a professional sports league, our company teams can use the same technology to stay connected to one another. If your team hasn’t already, Microsoft Teams, Zoom, and Google Meet are all video conferencing technologies that have kept many workplace environments connected. Being away from our family, friends, and coworkers can be hard, but technology has made things a little easier and the world a little smaller.