This Week in Getting Hacked: ISIS vs Anonymous

This Week in Getting Hacked: Government Can Easily Get Hacked

How to Tell the Difference Between Bits and Bytes? 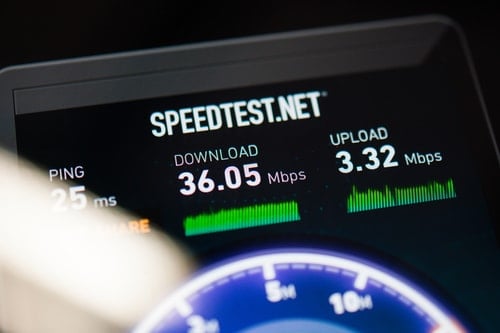 Get ready, folks. This is something everyone should take the time to read. There is a difference between all these megabits and megabytes and it’s rather consequential. So before you go yelling at your Internet Service Provider (ISP) that you’re not getting the speeds you’re paying for, please do a little bit of research (note: we 100% condone yelling at major ISPs. They’re quite greedy and awful).

First let’s get a little technical (if you’d like to skip to the “explain like I’m 5” version, please go to the “Why Do Files Not Download at the Same Speeds I Get on a Speed Test?” header):

Bit and a Byte: What’s the Difference?

If you’re an avid reader of our blog (god bless you), you may remember our three-part series on Internet Protocol (IP) jargon. In that, we explained a little bit about how binary works so that one could better understand the different blocks of IPv4. Well, we’re going to draw from that knowledge a bit (no pun intended (alright, maybe a little)) to explain the difference between a bit and a byte.

What Is a Bit?

A bit stands for a Binary Digit. That is, the only two numbers in binary, a 0 or 1. Bits are awfully small as far as programming is concerned and are rarely used in such matters (although it can and does happen).

Bonus: thanks to Reddit user white_nerdy for pointing out that the first CPU, the Intel 4004, used a 4-bit bus!

What Is a Byte?

According to catb.org, a byte is defined as “a unit of memory or data equal to the amount used to represent one character; on modern architectures this is invariably 8 bits.”

In other words, a byte represents a single character’s worth of information. This would be any number between 0 and 255. If you want an easy way to remember it, it kind of sounds like eight. Byte, eight.

Now that you know the difference between a bit and a byte you may be wondering, if you’re not a programmer, why it even matters. Welcome to the world of speed tests and abbreviations.

Why Aren’t Files Download at the Same Speeds I Get on a Speed Test?

One of the most common gaffs when it comes to customer-ISP relationships is the understanding of “MB/s” and “mbps.” If you’re any good at abbreviations you’ve probably already deduced that “MB/s” is megabytes per second and “mbps” is megabits per second (for more information on kilobytes, megabytes, gigabytes, etc. check this out).

So most of the time megabytes are used for file size and megabits are used for download speeds. So when one sees a file downloading at 3 MB/s and they’re paying for what they think is 25 MB/s download speeds, they’ve simply confused the matter. What they’re really paying for is 25 mbps or megabits. To save you some math, 1 megabyte (MB) is roughly equal to 8.4 (let’s just call it 8) megabits (mb).

Note: Network speeds were calculated in bits long before there was even an Internet to download files. This and for obvious marketing reasons are why ISPs still sell speeds in bits and not bytes.

So, if you wanted to calculate how fast a 20 megabit per second modem can download a 10 megabyte, the calculation would be as follows:

So, in the above example of the frustrated internet user, their file is actually downloading at around 24 megabits per second (mbps)—only one bit less than what they’re paying for.

Obviously, internet speeds will vary and different times of the day, so you won’t always get the speeds you’re paying for—that’s just how the world works unfortunately.

What Other Factors Could Affect Internet Speed?

There are many reasons you wouldn’t be getting the speeds you’re paying for besides the traffic fluctuations during certain times of the day.

One reason could be the speed or capacity of the server at the other end of the file transfer. If it can only be sent at 3 MB/s, that’s what you’ll get regardless of the speeds you’re paying for. To test a server to see if it’s slow or if you are slow check out our speed test page.

Typically, however, an ISP will just buy a 100 mbps connection (see the section on our speed test page about hops for more information) and share it between users. That’s why if one guy decides to download heavy files, the other people on that connection are going to suffer. We say, screw that guy.

We hope you learned much about bits and bytes—enough, at least, to get to a point where we can stop bolding them.