Millennial Executive: How to Be a Good Buyer

This Week in Getting Hacked: Equifax Edition

The EMP Threat: Is Your Data Center Protected? 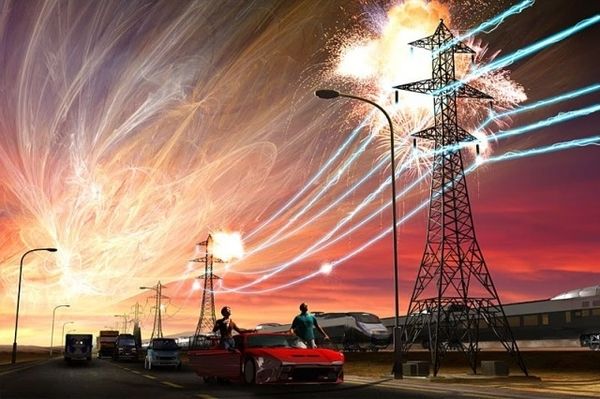 When one thinks of threats to a data center, we’re fairly certain “attacks from space” is far down the list (for some of us, anyways).
Well, there is a very real threat to our data coming from the great beyond: EMPs. That’s ElectroMagnectic Pulse, for the uninitiated and it’s basically space weather.

So, how exactly can EMPs hurt a data center and what protections are available against them? That’s exactly what we intend to answer.

How Are EMPs So Destructive?

The basic definition of EMPs is “an umbrella term identifying two forms of damaging high power electromagnetic signals.”
So, what exactly is “high power,” in regards to these pulses? Let’s get math-y!
Volts per meter (V/m) is the standard unit of electric field strength used to determine electromagnetic immunity in equipment, most of which can survive pulses of around 10 V/m.
A standard EMP causes a pulse of much more than 10,000 V/m. So, you kind of see the problem.
There’s also HEMPs (High-altitude Electromagnetic pulses), which measure more than 50,000 V/m and IEMI (Intentional Electromagnetic Interference) which is an deliberate EMP used to cause destruction and can be anywhere inbetween.

The Concern
Public data centers which today house humanity’s entire society (government functions, personal and corporate information, etc.), are crucial to the everyday lives of the people of Earth. A data center struck by an EMP would have devastating effects since most data centers nowadays do very little to protect themselves from these pulses.
In fact, a 2008 United States government report states that recovering from an EMP striking a data center (and more likely, the power grid supplying it), would take anywhere from four to 10 years and could cost more than $2 trillion.

We’ve mentioned space already, but it really isn’t “space” that’s sending these pulses. The most likely culprit from space is the thing we can’t live without: the Sun. That’s right, the thing that nourishes all life on this planet, is the very thing that could destroy those family photos you put up in iCloud.
Solar storms, if you remember all the way back to 2014, have already caused electrical interference on Earth. And that was just one passing by. A direct hit would have more devastating effects than just data centers, but one that hit just a little bit more is enough to send us back to pen and parchment.

Space isn’t the only place EMPs come from, however. Topically, those massive HEMPs get emitted from nuclear blasts.
A nuclear detonation 60 miles up in the air would send 1.5 million square miles of HEMPs around the globe.
So how do we protect our precious data from EMPs? Luckily, the world is beginning to take notice.

How Data Centers Can Protect Themselves from EMPs

EMP shielding for data centers is something that’s been on the table since the Critical Infrastructure Protection Act (HR 3410) of 2013. The act required the government to educate owners and operators of critical government infrastructures (i.e. data centers) of EMP threats.
This has gotten the attention of data centers all over the globe and they have started implementing EMP protection as part of their marketing.
In fact, remember this article about crazy data centers around the globe? Most of the ones underground have been selling their EMP protection for a while now (NOTE: that’s not because being underground makes you safe from EMPs—these particular data centers are just crazy about disaster recovery and protection from natural disasters).
To be absolutely sure your data center can stand up to any type of EMP, they have to undergo rigorous, meticulous, and costly structural planning, testing, and certification procedures.

According to Data Center World, EMP mitigation and protection inside a data center is broken down into two levels.
Level 1: EMP Protected Environment
Level 1 means that your equipment is shielded enough that you it will survive a pulse. This does not mean that all the other bells and whistles of a data center (the power, cooling, etc) will. It just means that after those utilities are restored, so will your data.
Level 2: Independent Power and Utilities
Level 2 means that your data will be operational and accessible before, during, and after an EMP due to independent utilities which are also EMP protected. To be considered “Level 2” a data center must have HVAC, Generators, and Telecommunications be protected.

Examples of Data Centers That Are EMP Protected

Kris Domich, a founding member of EMP Grid Services, is on the record saying that it does not cost much to protect a data center from EMPs.
Domich said the idea for the EMP-resistant data center came from a customer, an insurer, that wanted to protect its data from electromagnetic pulses.
Lifeline Data Centers Fort Wayne facility is set to open and also be shielded from EMPs, even though it initially wasn’t planned to. It added a year to the construction timeline, but members say it was worth it since the facility is being billed as their flagship location.


There’s some final words on EMPs that haven’t yet been addressed: the probability.
If they are such a threat, why haven’t they gotten much attention? Why hasn’t there been an attack before?
Well, the truth is that a data center being felled by an EMP is, in all probability, not likely. That does not mean, however, that it can’t happen at all.
There are detractors that say if an EMP takes out a data center, that there are likely larger concerns that need to be taken care of due to the fact that a solar storm or nuclear blast would have much more devastating effects than a few servers losing their data. But, when push comes to shove, would you want your data to be protected anyways?