The 5 Best Ways to Store Your Data

Are We on the Verge of an Eternal Data Storage Solution? 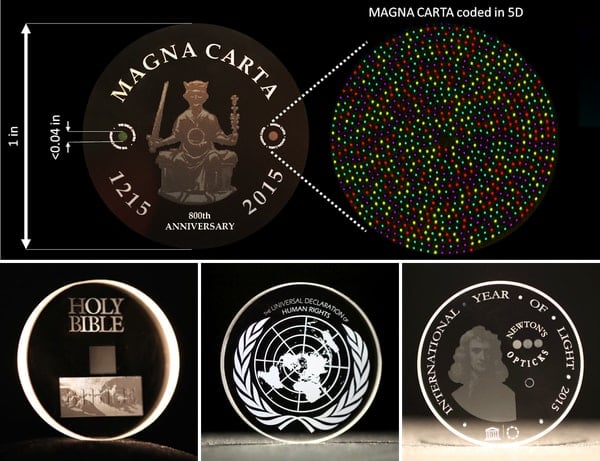 The Future of Data Storage Is 5-D

Scientists at the University of Southampton in the UK have invented a way to store data that can last forever.

It’s called 5-D data storage, and at the same size as a CD, it could be used to store as much as 360 terabytes of data, with an estimated lifespan of up to 13.8 billion years. That’s five times the information held in the Library of Congress, with a longevity equal to the entire existence of the universe as we know it.

Peter Kazansky, who founded the method with his team at the University of Southampton (UK), claims that 5-D technology was discovered by accident. “We discovered the nanostructures by chance. That’s why the unofficial name of my lab here is the Serendipity Factory. We were trying to investigate how light interacts with material. But then, by accident, we discovered the nanostructures, and then all this story started to happen.”

The nanostructures Kazansky is talking about are the tiny (nanoscale) “etchings” that can be written on glass with powerful lasers. Those nanostructures can be used to record and store data optically like a CD or DVD does, but the difference is that they are written inside the glass, where they cannot be damaged as easily.

Because they are housed under such a protective surface, each etching can be extremely small without being damaged. The nanogratings are only 20 nanometers (a billionth of a meter) in diameter, and the distance between two adjacent spots is only 3.7 micrometers (a millionth of a meter) This allows for a lot more information to be written on a very small surface.

It all started in 1996 when Kazansky accidently found that he could write data on fused quartz or “nanostructured” glass. The fused quartz, which is known for its stability and resistance, especially to high temperatures, is actually a very tough material. Glass is chemically stable and very resistant to chemical changes, which is why they are used to make most of the beakers and test-tubes in your chemistry class. It can also withstand temperatures up to 1,000°C (1832°F) before there is degradation to its structure.

In fact, the internal studies have shown that even at elevated temperatures of 462K (370°F), the longevity of a 5-D disk still comes out to billions of years. This means that 5-D discs are safe from any kind of natural destruction, from heat to cold; as long as they are not dropped or smashed by something heavy (they are still made of glass after all).

As Dr. Kazansky said in a recent interview:

“Normally, you don’t think about whether something can live forever. But it seems that, with our technology, we’ve managed this. If we record some data or documents, they’ll live forever. That could be interesting for future civilizations. We can now claim that information is immortal.”

The structure of the glass not only provides a stable structure, but it’s also optimal for recording data. A femtosecond laser is able to make nanostructures in the glass at super-fast speeds (femtosecond means one quadrillionth of a second). With super intense light pulses, the laser is actually able to restructure the glass inside, and crystallize it. These crystals are super strong, and can be placed with incredible precision. Each one can alter the way that light travels through the glass, which can be converted into data that is read optically—just like a CD or DVD.

A traditional CD or DVD uses holes and bumps to record data as 1’s and 0’s. When a laser passes over a bump, it will reflect back and record that data as a 1. When there is no bump, it’s recorded as a 0. These two dimensions can also be accompanied by multiple layers (with dual layered DVDs), making three dimensions to record data (an X, Y, and Z, axis).

5-D storage utilizes this same ‘3-D’ technology, but it can also add two more dimensions. After experimenting, Kazansky and his team were able to polarize the nanostructures, and, using the ‘slow axis orientation’ and the ‘strength of retardance,’ they were able to change the speed that light traveled through them. These speed changes can also be recorded as separate values, meaning each nanograting can represent 5 different values.

That is why it’s called 5-D storage because each bit of information can be written in five different dimensions, which allows even more data to be stored in less space.

At the moment, 5-D technology is not available to the public, but the creators are eventually looking to commercialize the technology. As Dr. Kazansky stated in a recent study, “This technology could be produced on a commercial scale for organizations with large archives (e.g., national archives, museums, libraries, and private organizations). We believe that our method will also prove attractive for the consumer market if the cost of hardware (particularly the expensive femtosecond laser) is reduced.”

At the moment, the equipment is very expensive, but the same thing could be said of any technology in the early stages. Hard drives were once as large as refrigerators, and too costly for most consumers. It was only after the technology became popular, and improvements were made, that prices went down and more people were able to use the technology.

So for the moment, Dr. Kazansky and his team are focused on using 5-D technology for large-scale projects, such as building an “eternal archive” in Antarctica, and making a time capsule to send to mars.

So far the team has made copies of the King James Bible, Isaac Newton’s Opticks and the Magna Carta have in order to preserve them for the future. Dr. Kazansky and his team also recently presented a copy of the United Nations’ Universal Declaration of Human Rights to the UN, which he claims, “will survive the human race.”

“It is thrilling to think that we have created the technology to preserve documents and information and store it in space for future generations,” said Prof. Kazansky. “This technology can secure the last evidence of our civilization: all we’ve learned will not be forgotten.”