The Top 5 Life Lessons I Have Learned so Far

This Week in Getting Hacked: A Look Ahead to Hacking in 2016 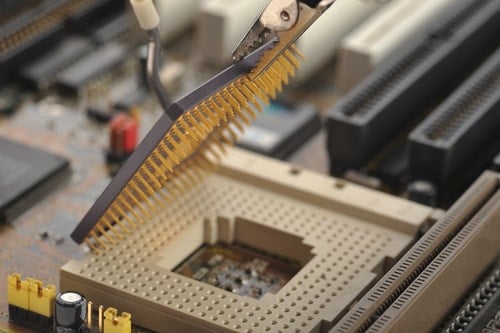 Remember dial-up Internet? Well, since we discovered that the Internet can be faster than a geriatric slug on a salted, snowed-in street there’s been a push to load websites as fast as possible. Any delay anymore can be frustrating and would be accurately described as a first-world problem.

It was the same thing with computers as well. Keeping loading times low for software, games, and applications is a primary concern for new computer buyers; and the first thing a consumer is going to look at is how fast is the processor and how much Random-Access Memory (RAM) the machine has.

But which is better? More RAM or a faster processor? Surprisingly many people do not know the answer so let’s settle the debate once and for all!

But first, as always, a little background is needed.

What Is Random-Access Memory (RAM)?

RAM is what computers use when they need to access something quickly. For instance, whatever version of the Windows Operating System (OS) you’re using will always be loaded on your computer’s RAM at startup. That makes sense because the OS is what makes a computer operable.

We’ll get into detail below, but you can check out this video on the subject if you don’t like words: https://www.youtube.com/embed/SOyzN62rZ40

Things like your internet browser, documents, pictures, and games all load from your hard drive to your RAM when they’re initially started up (funny enough, this process is done by your…processor). This is why your Random-Access Memory differs from the much larger hard drive memory—so that programs can be operated much more quickly.

That leads to why it’s called Random-Access. Any of this pre-loaded data can be accessed randomly, which is to say that the computer doesn’t have to go through the preceding bytes of memory first. Any byte of memory can be accessed at any time.

You can think of RAM as being the short-term memory of your computer with the hard drive being the long-term memory. Much like when you’re working on a project, there are things that your brain can gather quickly because it knows you might need that information for what you’re currently working on. But if you need to access something completely different, maybe you can’t think of it as quickly because it’s stored in your long term memory.

And, just like a hard drive, there are different types of RAM—let’s check them out.

The two main types of RAM are:

The difference between the two are in how they refresh, or speed. SRAM is faster because DRAM needs to refresh quite often (thousands of times per second) whereas SRAM doesn’t.

In terms of seconds, DRAM gives access times of about 60 nanoseconds. SRAM does the same in 10 nanoseconds. Since the speed difference is so great, one would expect SRAM to be the most common type of RAM, but it’s not because it’s quite expensive.

What Is a Central Processing Unit?

The Central Processing Unit (CPU), or processor, is the integral part of your machine. It is, in fact, the computer of your computer.

There are a few companies, like Intel or AMD, which provide the majority of processors to most machines and there are many different types of Intel or AMD processors, each able to deliver various speeds.

A great basic description of how a processor works can be found on wikipedia: “a CPU executes an instruction by fetching it from memory, using its ALU to perform an operation, and then storing the result to memory.”

The faster a processor is able to do that, the faster your computer will be. This is because it takes the processor to load and retrieve information from RAM. In essence, you could have unlimited RAM, but if your processor can only handle a certain workload, you’ll notice no speed difference.

So, What’s Better: More RAM or a Faster Processor?

That’s not to say that having 2GB of RAM with a top processor would work the same as having 16GB of RAM. But if you think you have a decent about of RAM (typically these days 4GB and higher), but your computer is running slowly. Think about upgrading your processor.

That’s great in theory. But swapping out processors could foul up different parts of your machine. That’s why you should check how much RAM you’re using in the Task Manager and see if it’s a RAM problem or a CPU problem.

If you’re not using much RAM, it’s time for a better CPU (and probably a better machine). At that point, adding more RAM will have little impact in solving the problem.

It’s like this: RAM is the size of the desk, but the processor is the person sitting at the desk.