Try Networking One of These! Servers have been around since the 1970s but the earliest examples were large, room-filling computers that used a lot of power. The computer, now an essential part of life for so many of us, was not invented in the 1970s but as a tool for calculation way back in the Industrial Revolution.

Charles Babbage designed and built something he called The Difference Engine; it helped mathematicians eliminate human error and speed up the process of producing tables and performing complex calculations.

He proposed the idea in a paper to the Royal Astronomical Society, explaining the possibilities to aid the work of the Society and other scientific establishments.

Though The Difference Engine was never built, after many years of research Babbage produced a working model of something he called The Analytical Engine. It was the closest thing yet that had come to anything like a modern computer. It had a form of memory and was an arithmetic logic calculator that used punch cards as data input device. That’s a long way from the mouse, keyboards and voice activation software we have become accustomed to! However, we wouldn’t see the first true computers until the 1940s. 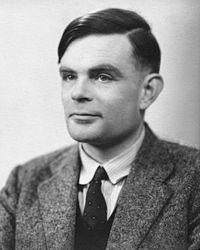 Alan Turing was a well-known mathematician and logician who, during World War II worked on the decoding German transmission at Bletchley Park, the place made famous for deciphering the Enigma code.

After the war, he worked in a number of roles where he eventually developed the first computers. Though his first proposed machine, the ACE (Automatic Computing Engine) was never built, a number of examples were built in the years that followed constructed around his designs.

He is best known for something called the Turing Test. Turning wrote a paper discussing a process by which a person might ascertain artificial intelligence; he proposed a number of issues of computing philosophy and ends the paper expressing that it would be possible for a machine to attain human intelligence if it could sufficiently learn.

The test, then, would make a computer indistinguishable from a human in terms of thinking power. Today, we used the term “Turing Complete” to describe any computer system that could mimic the functions of Turing’s standard computational processes; the ability to mimic any other computer. This means every machine since computer power and function is universal and the manufactured elements are standard (some small variations aside) in that they all use a CPU, motherboard and memory.

Servers have been around since the 1970s and are the central core of any business computer system providing networked drives, security, the function of keeping them linked together and providing services that might require multiple machines. The earliest examples were large, room-filling computers that used a lot of power to keep the systems cool and cope with the massive input and output of data that happens every second of the day.

These days, any computer can be used as a server though this is best suited to smaller networks of perhaps no more than five or six machines. For something a little more involving, such as a large office building or even the central server to a national network, it would simply not suffice. This is when we still need dedicated server rooms because despite that they are far more powerful (and still smaller than the first servers) they still need a lot of space and cold air to keep the system cool.

Some modern servers use removable racks inside the case to increase or decrease requirements as and when necessary. This makes upgrades and replacements far easier and cheaper than the old all-in-one unit. They also provide a degree of redundancy so your business will not suffer too much in the result of a system crash, having spare units will take up the slack.

Rack computers are demonstrating how interchangeable and upgradeable computer servers are in an age where we need more and more computing power.

About the author: MG Mason is a freelance copywriter and self-published author from the UK. Visit his professional website and blog at sweattearsanddigitalink.com.