What You Can Learn from Healthcare.gov’s Failures 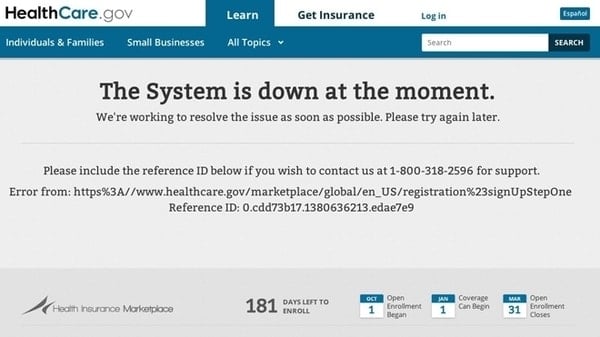 Healthcare.gov went down this morning to the surprise of nobody…

This isn’t the first time the website has experienced problems.  You’ll remember when the site went up late last year, it had the reliability of a Geocities website from 1997.  They fixed that, and things went smoothly, but now that this—TODAY—is the officially, super official, we-swear-this-is-it deadline, the site crashed again due to increased traffic and technical maintenance.  Officials said that the site was due for maintenance, which is weird considering that it’s the LAST DAY for people to sign up.  That’s like Krispy Kreme having a donut extravaganza promotion but when you show up all they’re closed for construction.  Or all they have are bagels.  You get the point.

Then, earlier this afternoon (or morning, depending where you live), the system started randomly rejecting new applicants due to issues with the amount of traffic the site was seeing.  Great!

We can all learn from this debacle.  Make sure you have the necessary infrastructure that can handle a huge amount of traffic to your site/server if you plan on having a lot of traffic to your site/server.  You wouldn’t want to enter a bicycle into the Indy 500, would you?  It’s the old adage of not bringing a knife to a gun fight.  Bandwidth and connectivity can go a long way in making sure your site runs at peak performance during times of high traffic.

Businesses need to have their sites on at all times—outages reflect poorly with your customers and users and might force them to go somewhere else.

Lucky for the government, there’s not a lot of competition.