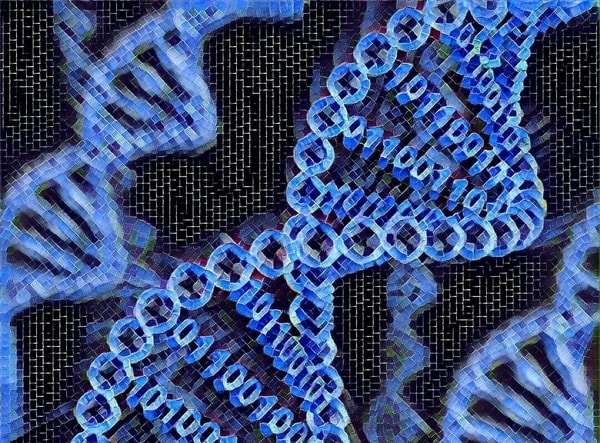 Imagine being able to store every bit of information you’ve ever learned in something as small as a drop of blood. This is what scientists are striving to do with the study of DNA data storage. What is this new and unusual type of storage? How does it work? Most importantly, what are the potential uses and implications for this new type of storage technology? Read on to find out.

What Is DNA Data Storage?

To understand DNA data storage, we first have to understand two things: DNA and digital storage.

DNA, or deoxyribonucleic acid, is the roadmap that holds all the details about every living creature. If you look at DNA with the right tools and a basic understanding of your target’s genome, you can tell everything, from where the sample came from to the genus and species of your target creature. You can find DNA strands that determine hair color, body type, and even susceptibility to certain diseases or conditions.

DNA is made up of four primary parts: A, C, G and T. These four letters stand for adenine, cytosine, guanine and thymine — the primary amino acids that make up DNA. The order of those four little letters determines, quite literally, whether you’re a man or a mouse.

Digital storage, on the other hand, relies on two basic parts: 1 and 0.  Every picture, text file, eBook, YouTube video and movie is stored in the same binary format: a mixture of ones and zeroes.

What does that have to do with DNA?

DNA data storage, in simple terms, means that scientists are working on a way to convert those 1s and 0s into As, Cs, Gs and Ts so the information can be written into a strand of DNA.

Why Is DNA Data Storage So Important?

DNA data storage is vitally important for two main reasons. First, traditional data storage methods might not be able to keep up with the current amount of data generated. Second, a strand of DNA can last for millions of years, making the stored data last much longer than any other type of data storage.

Based on the current rates of data generation, humanity could potentially generate more than 16 trillion gigabytes of data within the next year, with that number increasing exponentially over the next few years. That’s 2.5 quintillion bytes of data production every single day.

Right now, traditional storage methods like optical and solid state drives, depending on device quality and level of use, will usually last anywhere between three months and three years. Solid state drives, due to their lack of moving parts, will often last quite a bit longer than optical drives. That’s a couple of years, at most, before you should transfer your data to a new drive in order to ensure that your data remains safely stored.

DNA, on the other hand, can last up to one million years, under optimal conditions. Scientists have found viable samples of DNA, in icy landscapes such as Greenland, that hail from up to 800,000 years ago.

Imagine storing your prized photos, home videos and other data in a medium that not only lasts for millennia, but also easily accessible at any time.

Scientists are striving to accomplish this, and major breakthroughs are underway in the field of DNA data storage daily.

The thing that makes DNA data storage unique, aside from the storage medium itself, is the fact that it acts less like a hard drive and more like a computer’s RAM.

RAM, or Random Access Memory, is the part of your computer to place data that needs to be accessed quickly. In most computers, the operating system and data currently in use are in the RAM for immediate access. There is no waiting for the computer to retrieve data from the hard drive.

The most important aspect of RAM is that it doesn’t matter where the data is actually stored. Because it’s placed in the random access memory, users can retrieve it from anywhere in the data system.

DNA data storage is similar to your computer’s RAM, in that it doesn’t matter where in the DNA chain data is stored. Scientists can retrieve it from anywhere in the strand.

Unfortunately, that’s where the similarities end. Speed is a major disadvantage. While DNA can last nearly forever, you’ll find yourself waiting ages to retrieve some files. Reading data stored in a DNA chain is a slow process, but ultimately good in the long-term.

The most recent breakthrough in this unique and amazing type of storage is actually helping scientists read the data faster than ever before.

The DNA system contains what’s known as the chromatin system. This system, much like the RAM analogy we mentioned above, allows a specific gene to be pulled from anywhere in the DNA chain.

When you’ve got a piece of information stored in a DNA strand and want to retrieve it, the process goes something like this:

Previously, each reading for a targeted piece of DNA required one individual read per search. This took quite a while to accomplish. By utilizing a technique known as polymerase chain reaction, or PCR, scientists can speed up that process.

PCR allows scientists to find their targeted sequence or, in this case, stored data, and force it to copy itself many times over. Then, during sequencing, the researchers can pull out the information they need from the duplicated sequence and discard the rest, without damaging or potentially discarding the original sequence.

It’s still not as fast or as effective as traditional data storage, at least not yet, but this breakthrough is an amazing step forward for the world of DNA data storage.

Changing the World, One Double Helix at a Time

Right now, a single cell’s worth of DNA can hold the entire Library of Congress, or 250 million DVDs, or 746 Billion floppy discs, if you want to delve into obsolete technology.

The advances made in the last few years have shown just how much potential our DNA has, and how little we understand about it. In a couple of decades, you may be able to store all of your precious memories in a drop of blood instead of a drawer full of flash drives and memory cards.

These researchers are changing the world of data storage, one double helix at a time. We can’t wait to see what they do next!

Smart Home Assistants Are Now Sharing Your Internet with Neighbors