This Week in Getting Hacked: Digital Geneva Convention Edition

This Week in Getting Hacked: French Eagles Born on Top of Drones Edition

What Are Submarine Cables and How Do They Affect Colocation? 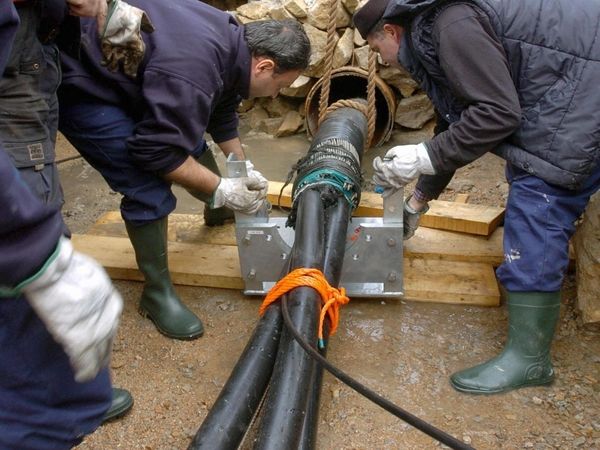 If you thought the data center industry was filled with sea-fearing landlubbers—think again.
Have you ever thought how data is transferred between two spots separated by an ocean or two? No, it’s not fancy satellites and laser beams that transmits data transcontinentally, it’s a good old-fashioned, seafloor-laid, hardwired connection between data centers. Questions about whether or not the Internet is actually better here on Earth than it would be in the Star Wars universe aside (where fancy satellites and laser beams would definitely be cheaper (if slower) than light-year-long interplanetary cables), there’s actually a boom in submarine cables and colocation could be the prize hog.

What Is a Submarine Cable?

Good question. Here’s a neat picture of what we’re dealing with:

That’s right—miles and miles of that stuff is sitting on the seafloor giving you access to your favorite British online magazine, your rather titillating Japanese gaming news, or your embarrassing German fetish site. It’s the new telephone wire, but wet.
To give a better idea, here’s an artistic interpretation of all the cables lying in all the seas (because you can’t draw a maritime map in any other style (we’re pretty sure it’s illegal)): 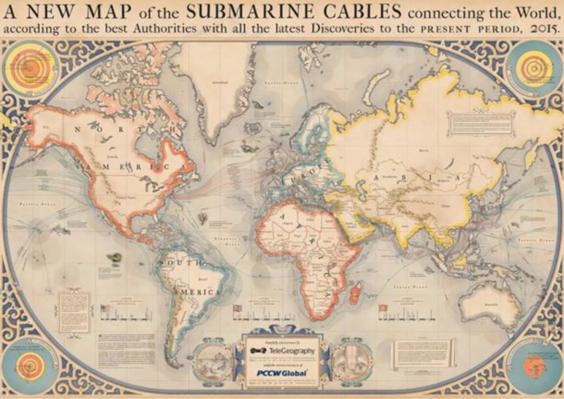 These cables connect every continent on the planet that matters (sorry Antarctica, you’ll have to download your emojis from space).
But I know what you’re thinking. Surely this can’t be a new concept. What about telephone or even telegraphs. Well, alright old-timer, you’re right. The idea of submarine cables isn’t exactly a new idea.
The first submarine cable was a transatlantic one which sent its first official telegram from Queen Victoria to President James Buchanan. It took 17 hours and 40 minutes to transmit 509 letters (can you imagine waiting almost 18 hours for that email from Grandma?). At the time, that was super fast because otherwise you’d have to wait for your message to be delivered by ship.
The construction of the first cable took almost four years. Another six was spent setting the whole thing up to work correctly, and the whole thing lasted for only a month after that. But that’s not the point (although how dumb and slow must we have been back then?). The point was that the concept of laying cable on the ocean floor could and did work.
Over the next decades the concept spread into a whole network of submarine cables which transmitted many telegrams and eventually telephone calls every day.

How Submarine Cables Are Laid

The cables are laid strategically to avoid reefs and shipwrecks while staying on mostly flat seabed. In shallower waters the cable is thicker (like a soda can) while in deeper waters they’re roughly quarter-sized. They are designed like this to avoid hazards like fishing ships and sharks.
Yes, sharks.
Anyways, the cables are connected sporadically to landing stations on the seaboard. Following smallish, surveying ships are the enormous, cable laying ships which lay the fiber cables on the ocean floor.

All in all, there are roughly 350 cables totaling more than 550,000 miles.
Now, throughout history these cables were provided and paid for by the telecom companies, but recently tech-giants like Google and Microsoft (who has been using the sea for other data-related projects as well) have started investing huge dollars in underwater cable infrastructure to ensure the world is always connected.

And that’s where our story really starts.

Access to these landing sites offer the flexibility of data centers to connect more easily (and faster) to other landing sites around the world. This, obviously, makes data centers with more landing sites far more attractive than those who don’t, while lowering the upfront cost to access of that kind.
These types of deals are happening all over the world. NEC Corp is contracting with RTI Connectivity to lay cable between Hong Kong and Guam—making 100 gigabit per second internet a new standard in the Pacific.
Domestically, Aqua Comms (the developer of AE Connect) is laying the first carrier-neutral submarine cable between New York, Dublin, and London. AT&T, CenturyLink, Digital Realty, and more have already signed up to connect their data centers to this cable.
This particular cable is amazing. Aqua Comms has partnered with Australian SDN-enabled interconnection provider Megaport to allow for elastic “undersea” bandwidth. Megaport CEO Denver Maddox explained how it’s supposed to work:

“If your infrastructure is physically located in New York City and you wish to directly connect to the availability zone of a cloud operator in London, you don’t need to be physically located in London to make that happen. Simply configure your New York-based Megaport with a VXC [virtual cross connects] to your chosen provider and, in less than 60 seconds, you have a direct connection at the level of capacity you need.”

What this means is that customers no longer have to signed a contract with forecasted bandwidth needs which was the case with carrier-owned/specific submarine cables. You just pay for what you need when you need it.
While this kind of undersea connectivity is great for large enterprises, the usage for SMB could be very good in the upcoming years.
So as the cloud giants continue to fund submarine cable projects, commercial data centers are piggybacking on the opportunities these projects create by huddling up near landing stations to provide access points for SMB customers.