Cloud Computing Trends That Are Catalyzing Digital Transformation in 2019

Common Mistakes You Might Be Making with Your Data Center

Everything You Need to Know about Ubuntu Dedicated Servers 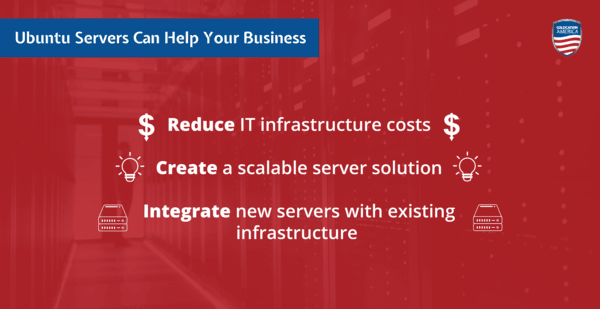 everything to know ubuntu

Ubuntu Servers are among the most popular offerings at many colocation facilities, and with good reason.

Today, 37 percent of all websites—including nearly 97 percent of the world’s top million domains (per Alexa rankings)—are powered by Linux, a collection of free, open-source software operating systems. Unsurprisingly, most data centers and colocation facilities are generally well-equipped to accommodate Linux. However, there are a few different Linux server configurations available. The three most common options are Ubuntu Servers, Red Hat Enterprise Linux, and CoreOS.

It can be confusing to differentiate the key features and benefits of each Linux server. In this guide, we’ll focus specifically on Ubuntu Servers, which support roughly 36 percent of Linux sites. These servers work with nearly every hardware and virtualization platform, serving a website, file sharing configuration, and containerization system. Because of their open-source dedication and broad-based integrability, Ubuntu Servers are one of the most popular options in the world—in 2015, analysts reported that “Ubuntu was twice as prevalent on Amazon Cloud services as all other operating systems combined.”

Tech giants like Microsoft, IBM, and HP Cloud all use Ubuntu Servers, but businesses of all sizes can take advantage of the benefits of Ubuntu. For a variety of reasons, small and midsized companies seeking a new server option should start their research with Ubuntu.

What Is an Ubuntu Server?

The term “Ubuntu” refers to a complete Linux operating system. The guiding principles of the Ubuntu OS are that the software will always be free of charge, it should be usable in every language (and irrespective of a user’s disability status), and it should allow users to customize and alter it however they desire.

The Ubuntu OS is not specifically a server distro—meaning users still need to install the server software on their own—however Ubuntu does make a server-specific product called Ubuntu Server.

Ubuntu Server also adheres to the guiding principles of Ubuntu OS. In practice, this means that Ubuntu Server can be customized to a much higher degree than other commercial server operating systems. These servers allow a software specialist to maintain full control over how the server operates, and offer transparency into the inner workings of the server. Ubuntu Dedicated Servers come with a comprehensive library of precompiled packages, making it easy for an IT team to call on the best-suited package manager for their organization’s specific needs.

The Benefits of an Ubuntu Dedicated Server

Ubuntu Dedicated Servers are popular for a variety of reasons. Most notably, these servers are cost-effective, scalable, efficient, and easily customizable.

Businesses of all sizes are drawn to the cost-effectiveness of Ubuntu Dedicated Servers. The latest version of Ubuntu Server is available for download by anyone at zero cost (minus the cost of hardware and the labor hours required for installation, of course). It can be deployed on as many machines as one wishes, and many of the available support plans are similarly inexpensive.

Not only are Ubuntu Servers themselves affordable, but they can help businesses reduce costs within their existing IT infrastructures. Ubuntu Servers are designed to provide maximum efficiency, delivering results with fewer resources and less computing power, and run on all major architectures, including x86, x86-64, ARM v7, ARM64, POWER8, and IBM System Z Mainframes via LinuxONE. These features translate to savings on both energy and maintenance costs.

Ubuntu Servers are also an excellent option for companies looking for a scalable server solution. They give businesses the capability to deploy an OpenStack cloud, a Hadoop cluster, or even a massive render farm. The servers are customizable to nearly any company’s server needs, and new versions of Ubuntu Server are released every six months.

The system is designed for maximum compatibility, seamlessly integrating with most existing client and server infrastructure. For instance, the latest version uses netplan.io to allow developers to perform networking configuration with ease. Similarly, the GNOME desktop environment allows for the personalization of nearly every element of UI/UX—notification sounds, popup style, fonts, system animations, and workspaces.

Additionally, Ubuntu Servers are well-equipped to help businesses for which virtualization is a top priority. They accommodate a variety of open-source options that can be used with the Ubuntu operating system. Further, Ubuntu Server is certified for Amazon Web Services, Microsoft Azure, Joyent, IBM, and HPE Cloud.

Finally, Ubuntu offers a feature called a “snap package” that has implications for how companies generate and store IoT data. Snap packages are secure, easily upgradeable Linux packages custom-built for an app and its dependencies. They can be compressed to save disk space and are easy to create and distribute.

Part of the so-called Ubuntu Core, snap packages operate on Ubuntu Server to provide one platform, format, and process that saves time for developers and allows cloud instances and servers to be utilized in the software design and development process. As the rise of the IoT puts pressure on data centers and colocation facilities, Ubuntu Servers will increasingly be relied on to provide security and streamlined delivery.

As the IT sector continues to evolve, Ubuntu Servers will only become more prevalent. Gartner predicts that by 2020, the cloud will absorb nearly $1 trillion in IT spending, and OpenStack (the world’s largest cloud computing platform) is most often used in tandem with Ubuntu Server. Ultimately, the reasons for using Ubuntu Servers are clear: they are cost-effective, customizable, secure, and frequently updated.

Of course, Ubuntu Server is just one of many dedicated server configurations Colocation America offers. Learn more about Ubuntu and the many other options available at our colocation facilities by getting in touch with our experts today.