The Technology Behind the World’s First 3D-Printed Cornea 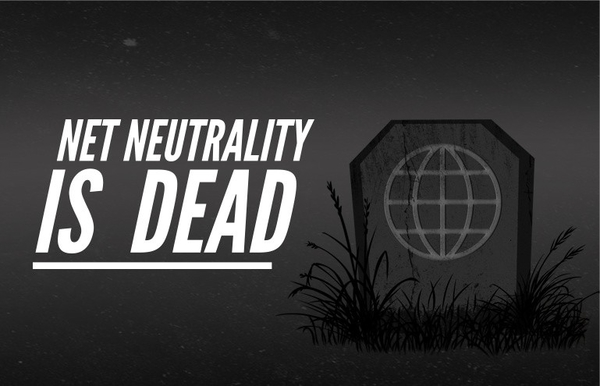 Yesterday is the first day of an officially different Internet. Monday, June 11, 2018, we no longer have the neutrality laws that protect the World Wide Web. Net Neutrality is the principle that all data and traffic should be treated the same. Internet providers were not allowed to decide what information, data, and websites were delivered faster or slower. And they were not allowed to favor their own data and their partners’ data over anyone else. This officially changed today.
The process started in December, when the Federal Communications Commission or the FCC, decided a vote to repeal the regulations on Internet companies. This process took six months, but yesterday was the day that these providers no longer have these rules placed on them.

What Does This Mean?

People are rightfully getting worked up over this news. Many are worried about slower Internet speeds and higher costs for broadband delivery. But what does this repeal truly mean? What can we expect from this repeal? And what will the Internet look like from here on out?
The Internet may not actually look or feel any different right away. But there is a possibility that services like Netflix, Hulu, Amazon, and YouTube may cost consumers more money in the nearby future. There is also a possibility that free services like Apple’s FaceTime and iMessage may not be free in down the line.
We honestly don’t know exactly what the Internet will be like in the future, but we do know that there are possibilities for big changes down the road. A handful of companies will get to decide what they want to do and what best suits them.

Can We Be Overlooking Censorship?

Most news articles and write-ups about Net Neutrality fixate on the slowing down of Internet speeds, additional costs of streaming services, or losing free services (which are all important). But what we all may be overlooking is the idea of censorship. Without the Net Neutrality rules and regulations, Internet Service Providers can not only give their partners faster-browsing speeds, but they also have the opportunity to pick and choose what news we see first and if we see it at all.
With the repeal of Net Neutrality, they may have been given the right to dictate our online news cycle.

Is Net Neutrality Really Over?

The neutrality law has been repealed, but it’s not quite dead yet. 23 State Attorney General’s filed a lawsuit to block the net neutrality repeal. California and New York are also close to passing their own neutrality laws. Having these two major states could possibly have ripple effects for the rest of the nation. But this also means whoever goes against the national repeal would probably go into some sort of legal battle with the Internet carriers.
A recent California bill that holds service providers accountable, similar to Obama’s net neutrality law has passed the State Senate, which means it is halfway from becoming law. This bill was proposed in January aims to counter the FCC’s repeal.
New York is also another state that is currently in opposition against the repeal. New York Governor, Andrew Cuomo signed an executive order back in January as well that demands service providers to continue to use neutrality regulations, going against the FCC’s repeal. Many other states have also signed a similar bill to keep net neutrality alive in their states.

On January 16, 23 states filed a lawsuit against the FCC to block the repeal. These states include the State of New York. State of California, State of Connecticut, State of Delaware, State of Hawaii, State of Illinois, State of Iowa, Commonwealth of Kentucky, State of Maine, State of Maryland, Commonwealth of Massachusetts, State of Minnesota, State of Mississippi, State of New Mexico, State of New Jersey, State of North Carolina, State of Oregon, Commonwealth of Pennsylvania, State of Rhode Island, State of Vermont, Commonwealth of Virginia, State of Washington, and the District of Columbia.
You can read the actual petition here: https://ag.ny.gov/sites/default/files/petition_-_filed.pdf
Additionally, 29 states have proposed over 65 bills aiming to instruct Internet Service Providers to maintain some version of Net Neutrality. Some of these bills have already failed to go through, but some are still pending.
Although the FCC repeal has passed—the fight isn’t over. Almost half of the States are looking to reinstate Net Neutrality or at least have some form of it. The 23 States involved with the lawsuit, and the 29 States that are trying to pass their own legislation all have a long uphill road to battle, but for many people, it is worth the fight.
The Internet is different today than it was yesterday. The World Wide Web might not come to a complete halt as some may believe, but the Internet we know and love may be slowly vanishing—dying if you will. It’s not completely dead, but it is on life support. The current lawsuit and the pending legislative bills may be our last hope.

Is There Anything We Can Do?

Net Neutrality has ended, but there are people still fighting for it. Along with the 29 States fighting the repeal, Battle For The Net is continuing the fight for neutrality, and they are encouraging everyone to do the same. You can do it on your own, or through their website, but if you want neutrality to be reinstated – you should write to Congress.
Our elected officials in Congress have the power to overrule what the FCC has done with repealing neutrality. They can do this by using the Congressional Review Act resolution, but for them to do so, you need to make your voice heard. There have already been over 16 million emails sent, over one million phone calls made, over 500,000 messages sent by text, over 8,000 websites sounding the alarm, and over 6,000 business supporting CRA.
If you are on the side of neutrality, it’s your turn to let your voice be heard. Click this link to see what you can do: https://www.battleforthenet.com/