Where Is the Next “Silicon Valley?”

The Technology Behind the World’s First 3D-Printed Cornea 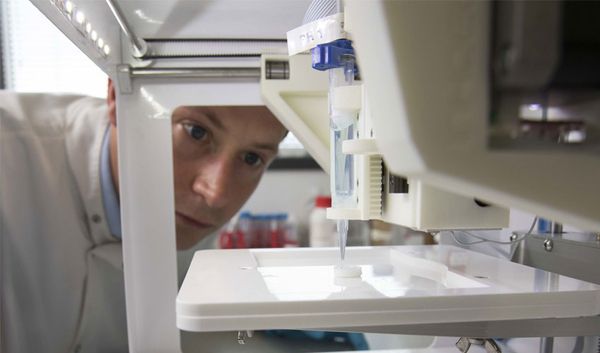 The earliest form of the 3D printing technology has been around for quite some time. In fact, the first patent was issued to Charles Hull in 1986 for the stereolithography apparatus. Since then, 3D printing has become a little more mainstream and accessible. Today, just about anyone can buy a smaller 3D printer from Amazon for $350.

3D printing is more accessible today, but scientists continue to advance the technology to do more remarkable things.
Researchers and scientists from Newcastle University in the United Kingdom have recently 3D printed the very first cornea using actual human tissue. This development can possibly be one of the most groundbreaking because it could change the way healthcare professionals treat patients who need corneal repair and even more so, how many people they can treat.

What Is the Cornea?

The cornea is the very outermost layer of the eye. It’s clear, dome-shaped, and covers the retina. It is an integral part of helping the eye focus. The cornea is made up of 5 layers all together. These layers are the Epithelium, the Bowman’s membrane, the Stroma, the Descemet’s Membrane, and the Endothelium.

Blindness Is Still a Major Issue

The issue of eye health has been a topic for quite some time, and blindness is still a very prevalent problem in our society. According to Center For Sight, blindness most often happens in adults between 60-70 years old, but corneal blindness can happen as young as 20. This is even truer when it comes to third world countries. What can be done about these corneal diseases?

What Is Stem Cell Cornea Transplant?

Because this is a prevalent problem in humans, there are not enough available corneas for every person in need of one. It’s estimated that in 2012, there was one available cornea per 70 people. 53 percent of the world has no access to this type of surgery, and the ones that did have access had an average waiting time of six and a half months.

Bio 3D Printing Could Be the Solution (How Does It Work?)

The lack of corneas available to patients is problematic, but with this technology, more patients can have the opportunity to receive this treatment. But how are they printing corneas? Is this the first time we have printed human organs? The answer is no. Scientists have been able to 3D print bones, called hyperelastic bones, but this is the first time researchers and scientists have printed a cornea. The human eye is undeniably more delicate than human bones, so this is quite the breakthrough in the scientific and technological communities.

These researchers used human corneal cells from a donor. They mixed these cells with alginate (algae) and collagen to produce what they call bio-ink. It took the team of researchers and scientists’ years find the right formula. The reason for this was to keep the cells alive, and strong enough to shape it into a working cornea ready for transplant purposes. They also had to make sure the cells could stay alive in room temperature for multiple weeks.

The artificial corneas take about ten minutes to print on a cheaper 3D printer, and because of the gel formula they formulated; the cells can stay alive for days. If this team could print an artificial cornea in ten minutes on a cheaper 3D printer, we can only imagine how much faster and more efficient they would be on a high-end printer. We can only imagine how many more patients they can help with this new technological advancement.

When Will Artificial Corneas Come to Market?

Although these scientists and researchers were able to print a cornea, they are still a long way from being ready for human eyes. This is merely a stepping-stone towards a usable cornea, but they are one step closer to being able to help people see.

According to Senior Researcher, Che Connon, “Our 3D printed corneas will now have to undergo further testing, and it will be several years before we could be in the position where we are using them for transplants. However, what we have shown is that it is feasible to print corneas using coordinates taken from a patient eye and that this approach has potential to combat the worldwide shortage.”

The other week we discussed how Apple, Microsoft, and Google were working on new standard or Braille. Assistive technology, which refers to technology that helps people with disabilities, has been more common in the news cycle lately. There have been many advances in the tech world that aim to help people who have disabilities. It is a great thing to hear that people are working on ways to help others and using technology as the platform to do so.

What’s Next for 3D Printing?

With the recent work done by scientists and researchers to print human bones, and an actual working cornea, it seems the possibilities for 3D printing are endless. If we can print such a delicate part of the human body, we may be able to use 3D printing for just about anything. 3D printing could be the answer to a lot of questions and problems we are facing today.