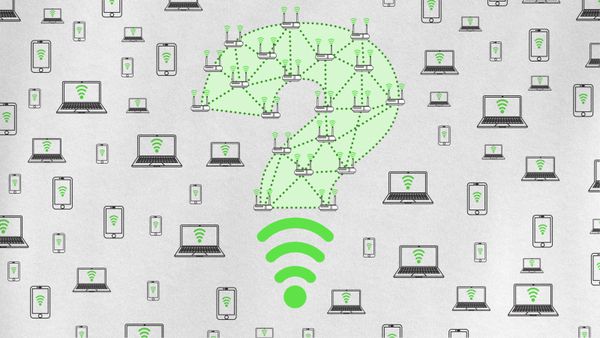 Technology jargon is a funny thing. Whether you have completed immersed yourself in technology or if you’re somewhat on the outskirts of it—there seems to be a new buzzword that emerges every other month. Do you remember “the cloud”? or “edge networking”? Well, here’s another one for you—Mesh Networking. And just like the previously mentioned buzzwords, the technology of mesh networking has been around for a long time.

What Is a Mesh Network?

Mesh networks work on any type of radio signal. It allows various devices to link together branching off each other allowing the signal and network to spread further.
A Wi-Fi repeater and a mesh network sound similar in the way that they work, because they aim to do the same thing. But there are well-defined reasons to use one over the other.

How Is Mesh Networking Different Than Wi-Fi Repeaters?

A wi-fi repeater or extender can be thought of as an in-place upgrade because it extends and increases the Wi-Fi signal throughout the area. Extenders work well if your house or office isn’t a large space. It’s more cost efficient compared to the mesh network system. You don’t have to swap out your existing router. There are some drawbacks when it comes to an extender vs. a mesh network though. Extenders can be difficult to configure and there is a possibility of the connection not being the same throughout the house or office space.
A mesh network solves the problem of having dead spots within the space by incorporating different hubs placed around the space communicating with each other providing a better overall coverage. Strategically placing these hubs can mean all areas of the space will have an excellent connection. A mesh network would be best for larger spaces, it’s fairly easy to set up, and provides simple central management. Another important advantage of a mesh network setup is each hub acts like a separate router, which means stronger connections throughout the space. With that said, mesh networks systems are more expensive. And if you like your space to have a certain ambiance—placing numerous devices around your house or office may be a drawback.

What Are the Pros and Cons of Mesh Networking?

Mesh networking will often give you better coverage throughout your home or office because you are not relying on one spot to broadcast a signal throughout the whole space. You will still need to make sure the one connected to the broadband connection is working properly, but if one of the nodes fail—you can easily replace the one bad node. If you’re using an extender, you are still trying to connect to the one server, but using a mesh network allows you to connect to the best and most powerful node for your current location. Nodes are also customizable so you can add or take away nodes as you see fit.
The price point of a mesh network can easily deter future users from trying it out. You can easily get a good router for less than a mesh network system. Nodes also don’t cover the same range that a router/extender would, which is why you would need multiple throughout your space. This makes scalability more difficult. And lastly, the speed may still suffer if your space is bigger and you are very far away from the main router. It could be better than a traditional router/extender combination, but it’s far from perfect.

Are Mesh Networks Right for Everyone?

As mentioned above, both Wi-Fi extenders and mesh network systems have specific usages. If you have a smaller space and a limited budget, I would recommend using a Wi-Fi repeater. Additionally, Wi-Fi technology has improved quite recently and will continue to improve according to the Wi-Fi Alliance. The WPA3 update and Intel’s 802.11ax update will be faster and more secure than we currently know. If you have a larger space to connect, and money isn’t a factor, I would recommend installing a mesh network.
A mesh network would guarantee an overall better connection throughout your space regardless of how big or small it is. If the space you’re trying to connect is small enough, you might not even need an extender. Maybe placing your existing router in a better and more centralized location would solve all connectivity issues. Also, having three or four devices around the house could potentially be an eyesore to some. A mesh network isn’t for everyone. Like many things, choosing between a mesh network and Wi-Fi extender will come down to your preference.

If you’ve decided to go with a mesh network—there are many mesh network systems that can be exactly what you are looking for. Well-known companies that we’ve all used before including Netgear, Linksys, Google, TP-Link, Samsung, and Asus are all making mesh network systems.
The Netgear Orbi High-Performance AC3000 Tri-Band Wi-Fi System is a great option for larger homes and office spaces. Like many mesh network systems, it’s easy to install and configure. But the connectivity does come at a price—both with its bulky form factor and its hefty price at $320.
Another great option is the Linksys Velop, which isn’t as bulky as the Netgear Orbi. It has come with a nice sleek design, it’s easy to install and manage. But it’s even more expensive at $500 for 3 mini tower nodes. It also lacks USB ports and doesn’t support dedicated band control.
A mesh network router system can be very expensive as you can see. If you’re looking for a cheaper alternative to try it out, Eero has a smaller kit that can get you started. The kit comes with one base station and one beacon for $270. Many houses may not need mesh networking, but if you’re curious to see this can be a great option for you. If you do decide a mesh network suits your needs, this can be a system that can be upgraded by adding more beacons.

We live in an extremely connected world. Everything from our phones, laptops, music and video streaming are all done through Internet connections. Because everything we do most likely involves a connection—the faster and stronger our connection is, the better. Since mesh networking can cover more ground and collect more data, it could be very beneficial to the Internet of Things. Many people are looking for ways to speed up and strengthen their connectivity. Wi-Fi extenders can do a good of increasing the network, but when that just isn’t working well enough, mesh networking can be the solution you are looking for.